Sally Potter is a creative filmmaker who flourishes by constantly taking risks. Sometimes this turns out very well, as in Orlando (1992) and The Tango Lesson (1997), and sometimes the quest for innovation can lead to a dud like The Man Who Cried (2000). Yes, we're happy to report, works. Potter has stated that it was written in response to 9/11, the demonization of the Arab world in the West, and the tide of hatred against America's arrogance in pursuing a policy of aggression in the Middle East. It is an unusual love story set in London, Belfast, Beirut, and Havana, and covers some of the hot button issues that separate individuals from each other, including God, politics, immigration, America, and power in all its forms.

Potter has chosen to write the dialogue in verse, and she has created different color schemes for the our visual experience of different cities. But perhaps the most imaginative touch is the character of a chatty house-cleaner (Shirley Henderson) whose concern for dirt and other signs of human fallibility provides a microscopic commentary to accompany the macroscopic look at the religious, cultural, and political fissures. She tells us in the the screenplay:

"They say my cleaning is the best
They've ever known. But cleanliness of course
Is an illusion. Those of us who clean
As a profession know the deeper source
Of dirt is always there. You can't get rid
Of it. You cannot hide or put a lid
On it, as long as human life is there.
It's us. The skin we shed, and then the hair . . .
They think that those of us who clean are small
Somehow, in body and in mind; we fall
Out of their line of sight; invisible,
We work our magic. Indivisible
One from the other; we're a mass, no soul,
No rights to speak of, just a basic role
To play keeping their lives looking good.
Cosmetic artists. That is what we should
Be called. Or dirt consultants."

Can love provide the healing to overcome such dreadful splits between human beings?

In London, she (Joan Allen) is a molecular biologist who is quite accomplished in her field. She travels abroad for conferences and lectures. Just as well, this scientist of Northern Irish descent is not close to her philandering husband (Sam Neill), a successful politician who arranges not to be home very often in order to avoid verbal skirmishes with his unhappy wife. One evening at a banquet, while feeling quite sad and sorry for herself, she encounters He (Simon Abkarian), a doctor from Beirut living in exile and making his living as a cook. They are sexually attracted to each other and begin a passionate affair. In a sense, they are both trying to find a safe harbor: she from her terrible marriage and he from his isolation as a Muslim far from home and family. His voracious sexual longing for her flesh turns her on. No scene more vividly conveys that than one in a restaurant when he fondles her with his hand under the table.

But after a particularly nasty verbal encounter with some bigoted co-workers in the kitchen, he is reminded of his religious and ethnic identity in a Western world. No matter what he does, he is seen as the enemy, "the Other," one who can never be trusted or treated with respect. He sees that his affair with a blonde English woman who has money and power is symbolic of selling his soul for sexual satisfaction. Breaking off their relationship, he returns to Beirut for the baptism of the first-born son of a friend.

Meanwhile, she is plunged into further despair when she is called to a nursing home in Belfast where her beloved aunt (Sheila Hancock) is dying. In tribute to her, she decides to visit Havana, the city that this socialist and atheist never saw. But before departing, she calls and invites him to join her there to see whether anything truly remains of their love relationship.

Yes is an exotic and erotic film that is carried into our hearts and minds by the top-drawer performances of Joan Allen and Simon Abkarian. It is a love story that takes us into fresh territory and shows us the horrible divisions that too frequently pull us apart from one another. Yes is also a deeply spiritual film whose abundant themes can best be summed up by this quotation from Buddhist meditation teacher Christina Feldman: "I, you, us, and them, winning and losing, victor and vanquished — these are no more than the tricks of the mind exiled from the heart. The face that we see before us is no other than our own, the person we see before us is ourselves in another guise. What else can we do but open our hearts, what else do we need to do?" 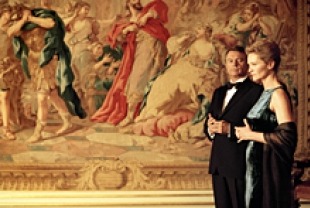 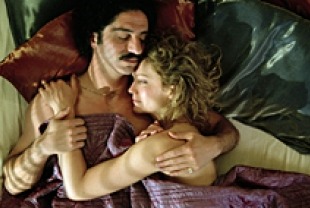