Economic inequality has led to stunning changes in society in Western countries, creating a wide gap between the rich and the poor and weakening the social fabric. Whereas once we thought we were all in it together and bound by the same rules, that is no longer the case. The dramatic upward movement of wealth to the lucky few has resulted in less money for everyone else. And for those on the bottom this means large doses of insecurity, anger, and envy.

Austrian Director Hans Weingartner has made a riveting film about three young people's alienation from the winning class and their efforts to rebel and bring about change in society. In a time when political issues are rarely covered or even alluded to in American films, this one dares to explore the terrible damage resulting from economic inequality, including the moral fallout from the selfishness of the winning class who take no responsibility for the havoc they have wrought.

Set in Berlin, the story follows Jan (Daniel Bruhl), an idealistic crusader against the injustices brought on by an uneven distribution of wealth, where the poor are treated shabbily and even blamed for their plight. A key to this character's moral center is given when he sees a poor man being ridiculed for his bad smell on the transit system. Jan intervenes and gives the harassed man his ticket.

But Jan and his best friend Peter (Stipe Erceg) have come up with a way of protesting the status quo. At night, they break into the villas of the rich who are away on vacation and rearrange things. They stack furniture and collector's pieces in piles and then leave a note saying: "Your days of plenty are numbered." However, they do not steal anything — their objective as the Edukators is simply to help these privileged people who are isolated from society see that their greed has hurt others.

Peter's girlfriend Julie (Julia Jentsch) works as a waitress at a posh restaurant and is still unable to pay her rent on time, so Peter offers to have her move in with him. When he takes a trip, Julie draws close to Jan. She shares the source of her anxiety and depression about the future: she was involved in an accident in an uninsured car and the man who was in the other vehicle has forced her to pay a 100,000 euro debt in monthly payments to him. When Jan learns that Julie knows where this wealthy man named Hardenberg (Burghart Klaussner) lives, they break into his house and have some fun.

But later, when she realizes she left her cell phone behind, they are forced to return; the businessman also returns and recognizes Julie. They call Peter, and the three of them decide to kidnap Hardenberg and take him to a remote cabin in the mountains owned by Julie's uncle. They then realize that this development could give them a public forum to express their political views.

Thanks to the excellent screenplay by Weingartner and Katharina Held, the drama becomes even more interesting as the three activists talk with the wealthy businessman. They learn that he was a rebellious student in 1968, lived in a commune and wanted to change the world just as they now do. Hardenberg laments the fact that his ideals slipped away from him slowly over the years, and that he wound up becoming what he once protested on the streets.

The finale of The Edukators is too delicious to spoil. But one scene beautifully encapsulates the entire film's moral message. There is something obscene about the arrogance and sense of entitlement displayed by some rich people dining in the restaurant where Julie works. They order her to take back the peach brandy because it was served in the wrong glasses. They enjoy humiliating her and asserting their power. The scene offers a tiny but poignant glimpse into the poisonous effects of the winning class who are convinced that they deserve the very best and are not afraid to dump on others to get it. 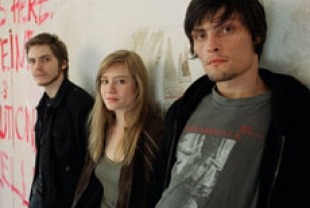 R - language, a scene of sexuality, some drug use