Directed by Jim Jarmusch
An anatomy of a middle-aged burned-out man who is led unwillingly to a place where he can get in touch with his feelings.

There comes a time in all of our lives when we lose interest in what is going on around us. We may experience a light depression during which we don't want to do anything or see anyone. Or this malaise may manifest as burn-out when we just don't have the energy or the will-power to invest ourselves in new projects. The dry periods in our lives bother us and are of real concern to those who are closest to us.

Don Johnston (Bill Murray), the lead character in Jim Jarmusch's (Cigarettes and Coffee) film, is a middle-aged Don Juan who made a lot of money in computers and is now stuck in a rut. He lives in a mansion and does nothing but sit on his couch and watch old movies or listen to music. Seemingly his only contact with the outside world is Winston (Jeffrey Wright), an African American who fancies himself as an amateur detective; he has a wonderful wife, five children, and three jobs. The contrast between the hustle and bustle of life in their home and the atmosphere in Don's house is both dramatic and telling.

In the opening scene, Sherry (Julie Delpy) is walking out on Don since their relationship is going nowhere. Then he receives a letter in a pink envelope from one of his old lovers. She informs him that she gave birth to his son who is now 19 and has hit the road and will probably come looking for him. Winston, who is upset about Don's listlessness and lack of anything to do, decides to use the letter as a project for his friend. After Don makes up a list of girlfriends from that period in his past, Winston Googles them and puts together an itinerary for Don, including a tape of special music he has created for him. He insists that his friend take flowers to each woman he visits.

Reluctantly, Don sets out on this quest. The first one on the list is Laura (Sharon Stone), an attractive widow whose racing car husband just perished in a crash on the track. Although they go to bed together, the real surprise even for the nonplussed Don is the antics of her sexy daughter whose name says it all — Lolita (Alexis Dziena).

The next woman on the list is Dora (Frances Conroy) who lives in a large but lifeless prefab with her real estate husband Ron (Christopher McDonald). Don doesn't bat an eyelash as they try to impress him with their good fortune. But things get uncomfortable when Ron brings out a picture of his wife as a bright-eyed hippie. When Don asks about children, the conversation takes a turn for the worse.

With no leads to who is the mother of his possible son, Don gets impatient and wants to return home. He carries on and meets Carmen (Jessica Lange), a lawyer who is now an "animal communicator." Her new career makes no sense to Don, and he alienates her secretary (Chloe Sevigny) by his mere presence in the office.

The last visit is with Penny (Tilda Swinton) who lives in a rundown shack. She has no interest in talking to Don, and her biker husband and his buddies kick him off their property. A final part of the trip is to graveside of a fifth woman who died.

Jim Jarmusch is an idiosyncratic filmmaker whose quirky movies (Stranger Than Paradise, Mystery Train, and Dead Man) have garnered him an audience of loyal followers who enjoy his droll sense of humor and his fascination with offbeat characters. In an interview in the New York Times with Lynn Hirschberg, the writer and director states, "My movies are made by hand. They're not polished — they're sort of built in the garage. It's more like being an artisan in some ways." Broken Flowers moves incredibly slowly, and Bill Murray's deadpan performance as Don Johnston (he must correct all the woman who hear the name of the actor from Miami Vice) doesn't vary throughout his journey. The film does provide an anatomy of a burnt-out man who is led unwillingly to a place where he can get in touch with his feelings for the first time in a long time. It isn't much but when you're in a rut, even the slightest movement out is something to be cherished as a grace moment.

DVD features include a making of the featurette with behind-the-scenes footage, a stills gallery, and an original theatrical trailer, soundtrack, and liner notes, features: "Girls in the Bus," "Broken Flowers: Start to Finish." 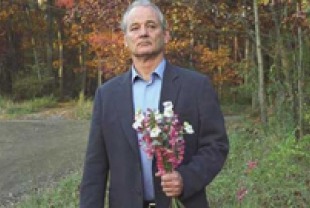 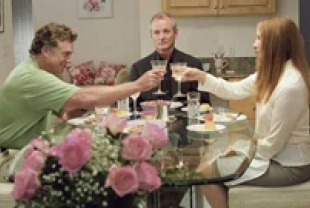 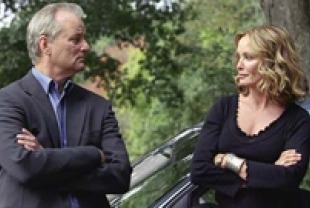