Directed by Jonathan Jakubowicz
A grim and powerful depiction of the long day's journey into night experienced by a couple kidnapped by a trio of angry young men from the ghetto in Caracas, Venezuela.

In his book, Losing Moses on the Freeway, The 10 Commandments in America, Chris Hedges recounts experiences he had as a seminary student in a Boston ghetto. He writes: "Insight into life comes through suffering, but suffering alone does not bring insight. Many who suffer are trapped in the venom of their own hate. They cannot forgive. They turn it back on the world they despise. . . . The belief that because I have suffered I have a right to inflict suffering is the plague of the ghetto. There are few who rise above it, but those who do have a nobility and dignity that sets them free."

This harsh reality is depicted with fierce grimness in Secuestro Express, a film written and directed by Jonathan Jakubowicz. According to the filmmaker, every 60 minutes a person is abducted in Latin America and 70 percent of them do not survive the ordeal. This dark and violent drama is set in Caracas, Venezuela, where the gap between the rich and the poor is a yawning chasm.

Martin (Jean Paul Leroux) is a young man who has inherited a lot of money which he spends on drugs and entertainment. He has a disgust for the poor and views them all as criminals. His girlfriend Carla (Mia Maestro) works at a clinic for the poor and considers herself to be a caring person. After visiting a club, he gets upset over her naiveté in taking in a ten-year-old girl with cancer and looking after her. Carla cannot believe his heartlessness and lack of compassion.

It is Martin's luxury car that attracts the attention of a trio of kidnappers: Trece (Carlos Julio Molina), Budu (Pedro Perez), and Niga (Carlos Madera). For these angry young men, Martin and Carla hold the ticket to some easy money. They treat them as enemies deserving of no respect or mercy. For these ghetto residents, this is a class war in which the rich must pay for their selfishness and lack of charity.

Secuesto Express is not an easy film to watch with its eruptions of violence and venom. The enmity between the victims and the kidnappers grows after they demand $20,000 from Carla's father, Sergio (Ruben Blades). There are several surprising scenes including one at a bank, a visit to a drug-dealer, and a final one when the kidnappers are stopped by the police. Mia Maestro who appeared in The Holy Girl registers the strongest performance as Carla whose terrifying long day's journey into night is an unholy mixture of fear, dread, anger, and humiliation. Secustro Express makes it clear that class wars will increase in the future and those with lots of money will be the targets. 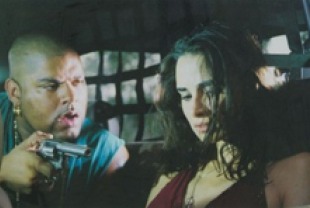