Directed by John Junkerman
An extraordinary and unforgettable documentary about two Japanese artists who have captured in their artistic murals the death and destruction of humankind's inhumanity in the twentieth century.

There are two parts to this extraordinary and unforgettable DVD release. The first is an animated film of the award-winning children's book Hiroshima No Pika narrated by Susan Sarandon with illustrations by the Japanese artist Toshi Maruki. On the morning of August 6, 1945, the United States dropped an atomic bomb on this Japanese city. It was named "Little Boy." The story gives a simple but moving account of a young girl and her parents.

After the flash of light and sudden darkness comes the fire. The little girl's mother rescues her husband who is injured. She carries him to one of the seven rivers in Hiroshima. They begin to look for help, traveling on the streets and stepping over mangled bodies. Children's eyes are fused shut and ghostlike people wander with their arms outstretched. The little girl sees a dead swallow, and a mother drowns herself after realizing that her child that she has been carrying is dead.

After three days, all that is in the air is the smell of burning corpses. A school is turned into a makeshift hospital. The girl's father is treated there. He dies years later, her mother's hair turns white, and the little girl never grows. On August 6, she joins others in sending a lantern out on the water in Hiroshima in memory of her father and the swallow. This pacifist work has touched the hearts of millions of people around the world and been translated into seven languages.

The second part of this DVD is the 1986 documentary Hellfire: A Journey from Hiroshima, which was nominated for an Academy Award and is written and directed by John Junkerman. It charts the amazing careers of artists Iri and Toshi Maruki (who illustrated Hiroshima No Pika). They married in 1941 and often worked together on projects of great importance to them. Iri specialized in the ancient tradition of ink painting whereas she painted in oils. In the opening scenes of the documentary they are working on a gigantic mural titled Hell, which is a summary of their previous examinations of the engines of war and destruction that took so many lives in the twentieth century.

The Marukis went to Hiroshima after the destruction of the city and did what they could for the poor souls who were badly burned. Visions of the charred bodies and the stench of death stayed with them for years, and they eventually began work on murals of the Hiroshima nightmare to educate the public. Painting during the occupation by America, they were not allowed to use the words atomic bomb. When they toured the world with their collection of murals in the 1950s, they were not invited to the United States because the exhibit was labeled by the authorities as propaganda. When they visit America in the 1970s, Toshi was told by a professor that she should also take a hard look at the Rape of Nanking in 1937 when Japanese soldiers slaughtered thousands of civilians. The Marukis put this atrocity in a mural and later did one on the businessmen who let tons of mercury into a Japanese river killing many citizens and causing brain damage in unborn children. They also covered the Holocaust in their art.

Watching these two very different artist collaborate is a real treat. He says "between the two of us there is one project," and each one tries to bring out the best in the other. The Marukis, who are now both dead, created a monumental portrait of the slaughterhouse of the twentieth century. They were not afraid to confront the darkness in human nature and within themselves as well. In their mural on Hell, they include Hitler, Truman, the Japanese Emperor, and themselves. Why include themselves? Because they admit that they were unable to prevent World War II, and they see themselves as responsible for the deaths of millions of people.

Seen together, Hiroshima No Pika and Hellfire provide a grueling and harrowing portrait of our inhumanity. We have much to learn from these fearless Japanese artists who dared face the shadow side of life.

Special features include a gallery of the Marukis' art, a "Susan Sarandon Suggests" Activism Page, and artist and filmmaker biographies. 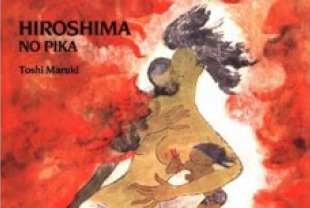