Fast, Cheap & Out of Control A Values & Visions Guide

A discussion guide to the documentary movie "Fast, Cheap & Out of Control" directed by Errol Morris. Recommended for people interested in finding spirituality at the movies.

It is rare and wonderful thing to find people who genuinely love their work. There is a gleam in their eyes when they talk about the surprises and the thrills that accompany their labors. Even when these vocational enthusiasts face the inevitable challenges and daunting obstacles, they persevere with a cheerful diligence. That is certainly the case with the four creative individuals profiled in this extraordinary documentary by Errol Morris.

David Hoover is a wild animal tamer who has a fondness in his heart for the the man who inspired him to take up the profession — the late Clyde Beatty, the famous trainer who starred in movie serials and radio programs. We see Hoover at work in the cage with lions and tigers. He respects their ferocity and is under no illusion about the dangers he faces in their presence. "If you aren't afraid, then you're gonna pay" he quips.

George Mendonca is a topiary gardener who expresses his creativity by fashioning hedges and trees into a variety of animal shapes. He acknowledges that his art is always in danger of being destroyed by storms, insects, and other rampages of nature. With great patience and pride in his craft he goes about his work using hand clippers to groom a giraffe, bear, and other animals.

Ray Mendez is an expert on hairless mole rats. He has spent years studying these mammals since they were discovered living in underground tunnels in Africa. Wearing a bow tie the shape of a butterfly, he explains with barely submerged excitement the pleasure he derives from observing their unusual habits. He notes that their tiny jaws are so strong they can chew through most walls. He's put his knowledge to work designing museum exhibits for the mole rats.

Finally, there is Rodney Brooks, a M.I.T. scientist who designs autonomous robots. He exudes great joy while talking about his work making insect-like robots. He and his colleagues don't even worry when one falls down. Brooks predicts that eventually carbon-based life will be replaced by silicon-based life.

In this eccentric documentary, Director Morris teases us into thinking about the blurring of boundaries between life and machines, animals and human beings. We are challenged to consider our futile efforts to control life and to evade the transitory nature of our ideas and projects.

Fast, Cheap & Out of Control is a perfect choice for those who want something completely different in their VHS/DVD viewing. It was voted Best Documentary of 1996 by the New York Film Critics Circle, and Roger Ebert called it "One of the 10 Best Films of the Year." Be sure to savor the plentiful circus metaphors; the humorous clips from Darkest Africa, a serial starring Clyde Beatty; and the lively music score by Caleb Sampson which delivers its own enchantments. The film runs 82 minutes and is rated PG (mild thematic elements). 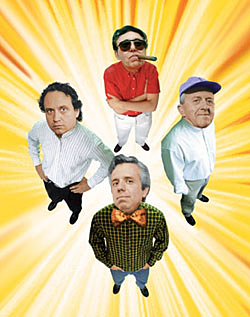 "The artist Louise Nevelson is quoted in Donald Hall's Life Work: "You have to be with the work and the work has to be with you. It absorbs you totally and you absorb it totally."

2. Play and the Creative Mind

"The creation of something new is not accomplished by the intellect but by the play instinct acting from inner necessity. The creative mind plays with the objects it loves," psychologist C. G. Jung said.

3. The Lure of Learning

Ray Mendez, the expert on hairless mole rats, says of his research: "This has nothing to do with science. I look at it strictly from the point of view of self-knowledge."

4. Work as a Social Activity

In Conversation, Theodore Zeldin writes: "The truly privileged today are the small minority for whom work is a pleasure. In the past, work was as much a social as an economic activity too. Go to an old-fashioned oriental bazaar, and you will find shopkeepers as interested in making friends with you, to the extent of offering you coffee, as in closing a sale."

In Writing from the Center, Scott Russell Sanders states: "When I consider the varied personalities of those diligent people, I feel certain that the willingness to work hard without complaint, indeed with gusto, has less to do with temperament than with conviction. If you believe that work is an evil to be avoided, if you aspire to loaf and invite your ease, then you will grab for every labor-saving gimmick, you will dodge every demand for effort, whether on the job or in school or at home, and you will coax or bully others into providing for your needs. But if you believe that work is a calling, a discipline, a way of exercising your gifts, even a way toward God, then work will seem to you as natural, as desirable, as breathing."

6. The Gift of Encouragement

John O'Donohue writes in Eternal Echoes: "There are people whose presence is encouraging. One of the most beautiful gifts in the world is the gift of encouragement. When someone encourages you, that person helps you over the threshold you might otherwise never have crossed on your own."

"Who are the happiest, richest people you know?" Rabbi Shoni Labowitz writes in Miraculous Living. "Aren’t they the people who are living out their visions, regardless of obstacles and challenges? Aren't they the ones who are dreaming even bigger dreams and contributing their talents and resources to the world? These are the people who are living joyful, enthusiastic lives, regardless of their possessions or lack of possessions. These people possess something more precious than material goods. They possess a spark of God that radiates in all they do."