Two prayers, three thoughts to contemplate, and a Buddhist practice to honor the dignity of differences and pave the way to a genuine feeling of unity with others.

The movie Freedom Writers challenges us to honor the dignity of differences and to pave the way to a genuine feeling of unity with others — especially strangers. Through the story of a high school class divided by race and gang affiliation who learn to empathize with each other, we see how respect and understanding grow out of shared experiences. But establishing this commonality is not easy to achieve in our world today.

Jonathan Sacks, Chief Rabbi of the Commonwealth since 1991, in The Dignity of Difference: How to Avoid the Clash of Civilizations, offers a striking portrait of the challenge of diversity:

Here are some practical spiritual steps we can take in our everyday lives to practice diversity: two prayers, three thoughts to contemplate, and a Buddhist practice.

A Prayer
by Brother David Steindl-Rast

You, the one
From whom on different paths
All of us have come.

To whom on different paths
All of us are going.
Make strong in our hearts what unites us;

Build bridges across all that divides us;
United make us rejoice in our diversity.
And at one in our witness to your peace,
A rainbow to your glory,
Amen
— from God Has No Religion

A Thought to Contemplate
by Angelus Silesius

"The more we let each voice sound forth with its own tone,
The more diverse will be the chant in unison."
— from Angelus Silesius

" 'Differentiation' honors the fact that every person, stone, tree, and animal is a unique creation. Indeed, the universe thrives on diversity. Learning not only to tolerate but to respect our differences, both individual and cultural, is crucial to the work of liberation. Differentiation provides multiple sources from which solutions to our problems are found."
— from Lyrics for Re-Creation

A Spiritual Understanding of Diversity
by Melannie Svoboda

"There is great diversity among human beings. Physically we differ from each other in things such as size, body structure, skin color, and facial features. We also differ from one another mentally, emotionally, psychologically, and spiritually. One of the greatest challenges of a healthy spirituality is learning to tolerate the differences we find in one another and not to view these differences as threats to ourselves. Moreover, a healthy spirituality should lead us to celebrate our differences and to see them as a reflection of God's beneficence and creativity."
— from Traits of a Healthy Spirituality

A Buddhist Practice
by Jean Smith

"May I mindfully appreciate
the diversity
of every being that I encounter,
who, like flowers,
bring beauty, variety,
and sustenance to our world."
— from Now! The Art of Truly Being Present 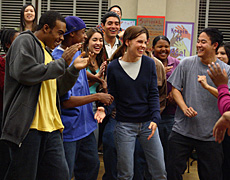