FAB: Of course, the strength of this practice is that it is intended to be applied to all aspects of daily life.

AH: Yes, let me tell you three stories from my own experience that enshrine different aspects of adab.

The first story happened to me when I was 25. I was in India for the first time in 15 years. I was alone and feeling miserable and distressed about my life, my lack of faith and my lack of understanding. I was in Tanjore, an exquisite temple city, sitting with my head in my hands on the steps of the museum waiting for it to open. I saw an old sweeper man sweeping away, and twice or three times he smiled at me, but we didn't exchange any words. I continued to put my head in my hands. Then after a while I looked up. He had gone. But beside me was a breakfast of Indian food and two cups of steaming hot tea. I remember bursting into tears because what he had given me was tantamount to half of his day's salary. And it was clear that he had understood my despair. He didn't think I merited this gift because I was a rich, privileged person: from one being to another, he just expressed the deepest possible compassion, so profoundly courteous that he didn't even stay around to have it acknowledged.

To me that is the perfection of adab — exactly the right gesture, done with tenderness and refinement of spirit, and then the refusal to even contemplate claiming any reward from it — so leaving me free to enjoy it in its fullest essence. This divinely beautiful gesture has remained with me ever since.

The second story is about my father because I think there is a similarity between adab and what is meant by the code of the gentleman in its profound sense. In the English and French ideal of gentlemanliness, there is an understanding of the necessity to show all beings respect, and that respect is a reflection of one's own inner nobility. The Sufi Abu-Uthman said something that I've always thought referred very deeply to my father: "Whoever has self respect shows respect to others, and whoever does not have self-respect does not show respect to others."

A few years after my father died, I was in Coonoor, in India, where he was buried. I was at a lunch and was talking to old friends of his. They all stressed a wonderful quality of gentleness, tenderness, and kindness of heart that everybody noticed and loved him for. One of the men at the lunch reminded me of my father and I was shaken by his great gentlemanly sweetness. Later, walking back to the estate where my mother lives, I met its old gardener, a poor man, who was watering his roses. He said, "You're looking very sad." And I said, "Yes, I'm sad because I'm thinking of my father." And he said, "You shouldn't be sad. You should be so grateful that you had such a father." And then he proceeded to tell me, "I have worked for many rich and powerful people, and the majority of them never even gave me the time of day. But every single time your father passed me, he would ask me how I was. He would ask me about my children. He would ask me if I had enough money, if I had good heating for the winter. He made me feel like a human being. And for that I will never stop praying for him."

That is another wonderful example of adab for me. My father was a man of very deep understanding. He'd been poor. He'd been rich. He'd ruled millions. He'd lost everything. He'd had a complete life. He was able to respect the powerful and dine with kings. But he also had a tremendous sense of the nobility and wonder of every life. And he took the time to make the poor people around him feel valuable.

The third story is of Bede Griffiths, a Christian mystic who had an ashram in South India. One of the characteristics of adab as I have understood it and experienced it in my life is profound hospitality. Hospitality, of course, has many levels, but adab incorporates all of them. It is a hospitality that arises out of a nobility of character, a desire to put people at their ease, a desire to celebrate the divineness of people, and a desire to create a divine atmosphere between you and them.

When Bede was dying, he suffered from several strokes that took away a lot of his memory and a lot of his understanding. And sometimes he would panic. And I remember being with him very late one night when suddenly he sat up, and he said, "Andrew, I'm terribly worried." And I said, "What are you worried about?" And he said, "I think I've forgotten how to greet people. Would you mind helping me to practice?"

So there he was, naked, sitting up in his bed, trying to learn again beautiful gestures of welcoming. It was so moving because I saw right to the heart of his whole being. His whole being was one that wanted to be hospitable. The idea that he couldn't be was really painful to him. But, of course, he couldn't lose his gift of welcoming. His whole soul and his whole life was expressed to me in that adab.

Next Page: The Prophet Muhammad as an exemplar of adab 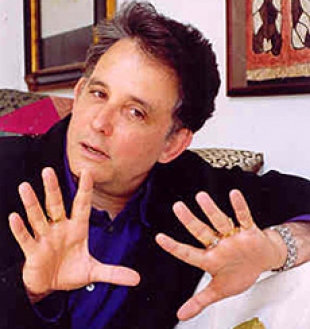