Rumi: a diamond whose every facet is an illustration of adab

FAB: Another great exemplar of adab was Jelaluddin Rumi, the 13th century Sufi poet. He is revered for his demonstration of this practice. What can we learn from his life and his poetry?

AH: Rumi, like Muhammad, is a diamond whose every facet is another illustration of adab. Let me highlight just four.

The first is the adab of his relationship to the Divine. One of the things that always amazes me when I read Rumi is his humility before the grandeur and the glory of the Divine, and his insistence that humility must be the foundation of all true relationships. In the Discourses, he says, "Remember always that all mystic sciences and exercises, all passions and acts of devotion, in comparison with the real mirth and majesty of God, are as if someone came to you, bowed once, performed some perfunctory little service and then went away."

This humility, as in the case of Muhammad, arose out of extreme and gorgeous experience of the glory of God and the majesty of the Beloved. And so I think it is the key to his whole work.

The second aspect of his adab that is very moving is the way in which he treats Shams, his spiritual companion whom he referred to as the Beloved. There is such adoration in his attitude to Shams, such dazzled admiration for this man who is conveying to him the most profound truths. That receptivity to the glory of someone else's realization, which enables him to become pregnant with it himself, is the clue to Rumi's life and poetry. In one of his poems, he writes: "You have stolen all my clothes. What will I give to the poor man / from your beauty ablaze like the sun, from the curls of your hair, my heart has become ecstatic / Oh, my soul, hand me this brimming cup / Each atom by your grace is a universe. Each drop of water a soul."

Many people who do not understand the depths of the relationship between lover and mystical Beloved think that what Rumi is expressing is a kind of hyperbole and exaggeration. But actually what is threading all of his poems to Shams is an overwhelmed gratitude. And I think this overwhelmed gratitude is a facet of adab.

For example, he once went with a group of friends to Meram outside Konya. And he vanished. And they found him dancing around a mill wheel. And they said, "Why are you dancing around this mill wheel?" And he said, "This mill wheel, can't you hear, is saying, "Sobou Kudoss, Most Holy One" at every rotation?" Then by a miracle they were graced the power to hear what he was hearing, which was that the mill wheel was praising God. This sense of everything in the universe being divine and in an ecstasy of praise, if only you were pure enough to hear it, informs the greatest of his poetry.

In an excerpt from his table talk, he says that everything is always beautiful if you see it through the eyes of God. "Adore and love God with your whole being, and He will reveal to you that everything in the universe is a vessel filled to the brim with wisdom and beauty. Each thing He will show you is one drop from the boundless river of His infinite beauty. He will take away the veil that hides the splendor of each thing that exists, and you will see that each thing is a hidden treasure because of its divine fullness, and you will see each thing has already exploded stilly and silently and made the earth more brilliant than any heaven, All things have sprung up and made the earth more magnificent than an emperor wearing a robe of the most resplendent satin."

So in this third aspect, Rumi exemplifies the adab of the divinely conscious divine human being, who is living in the real world and through his ecstasy, through his gratitude, through his rapture, through his infinite openness to the creation in all of its forms, shows that he knows that he is living as a divine being in a divine world. And that is really an ultimate form of adab — a real soaring of inner and outer gratitude, inner and outer praise at every moment because he is aware of the absolute saturation of all things by the divine essence.

There's a story I love that exemplifies this. One of Rumi's biographers, Aflaki, tells us: "One day Rumi asked a young disciple to bring him a tray of delicacies. He took it, covered it with cloth and walked away. 'I followed him at a distance,' the young disciple tells us, 'and he went into some ruins where a dog had given birth. There I was amazed by his compassion and pity. "For seven days," he told me," this miserable creature has not eaten and because of her children, she can't go off and look for food. It is God who brought her cries to my ears and ordered me to console her." ' "

This kind of sensitivity to the needs of the creation and this passionate commitment to serve that need is at the core of adab and is at the core of Rumi's character. You know he had a cat whom he loved very much and who loved him, and when he died, the cat stopped eating and died a week after him. And his daughter buried that cat with him. When asked why, she replied, "Because my father was a friend of the creation."

Next Page: The perfect teaching and way of being a teacher 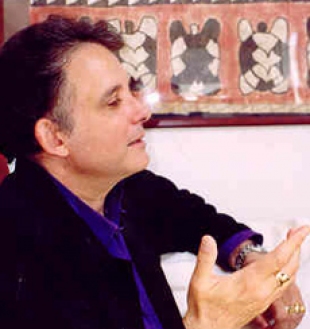