The Spiritual Value of Repetition and Routine

Variety is actually not the spice of the spiritual life; it flourishes when we do the same things over and over again.

Variety is the spice of life. We've been taught that by our consumer culture since we were very young. Think of all the movies in which immigrants experience for the first time the incredible diversity of brands in a supermarket. Our stores are stuffed with variations on the same things. All this feeds our need to constantly seek new foods, clothing styles, appliances, technological toys, and other objects of our desires.

We are also programmed by our culture to look down upon the drudgery of any kind of repetition or routine. People who learn through repetition are thought to be dullards with no imagination. We recall the film The Karate Kid where a Japanese martial arts master has his young student spend his day waxing cars or sanding floors, repeating the same circular hand movement all day. "This isn't karate," the boy complains, but we realize that spiritual practice is all about repetition and following routines.

In an audio message in our e-course "Creating a Monastery of the Heart with Joan Chittister", we learned that the power of Benedictine prayer lies in its regularity: "It's regular . . . like the dripping of a faucet on the ground of our hearts." Routine plays a central role in monasticism. The daily schedule consists of the same prayers and chores repeated over and over again until we see God's presence in the ordinary and are grateful.

Another movie comes to mind. In Smoke, Auggie, the manager of a cigar store, takes a picture from across the street every morning. He has a collection of 4,000 photographs of his store. One of his customers, paging quickly through his albums, declares, "They're all the same." But, of course, they are not. When he looks at the details of light, weather, and people, he discovers an astonishing variety in repetition.

In Sweeping Changes Gary Thorp points out that the word "routine" originally meant "a route or course of travel for trading" or a "religious pilgrimage" and has only recently come to mean "ordinary" or "of no special quality." The little chores in our kitchens, bathrooms, living rooms, and outside surroundings become spiritual practices when they bring us back to ourselves. As Thorp puts it: "When you bring energy and attention to each of your activities, you are no longer engaged in maintenance. You're involved in taking care of things."

Another effective devotional tool is the mantra, which is a simple phrase which is repeated silently as you go about your regular activities. It can be a formal term from a tradition or an informal word suitable to the moment like "Come Lord," "Peace," "Hope," or "Light."

Here are some things to think about as you explore the spiritual value of repetition and routine in your spiritual life. 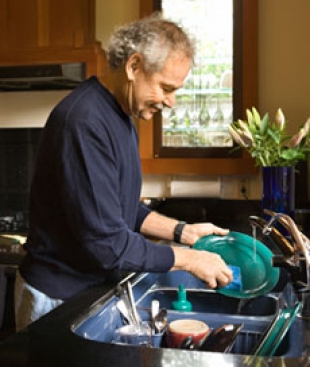