All My Relations A Reflection for the Anniversary of 9/11

A teaching from Native Americans about the need to take responsibility, forgive, apologize, and have hope.

How could we tire of hope?
— so much is in the bud —
there is too much broken
that must be mended.
too much hurt we have done to each other
that cannot yet be forgiven . . .
So much is unfolding that must complete its gesture,
so much is in bud.

Weeks after September 11th I climbed a mesa west of Albuquerque and walked among tourists from all over the world. We stood in awe of the desert floor, the vast horizon, and the late September sun. At the end of the tour, someone asked the Native peoples gathered to sell their fry bread and pottery how they had heard about 9/11 — only traditionalists live on the mesa, and there is no electricity or running water. Immediately practically every Native person flipped out their cell phones and said — same way you did! There was initial laughter. But then someone asked: what did you think of what happened? There was a heavy silence for a long moment and then every Native person moved together closely and began to chant the phrase that is most commonly translated as "all my relations, all my relations."

There was stunned disbelief as one of the elders spoke for all of them and said: We are so sorry, it was our fault. It never should have happened. No one moved and no one understood. An older woman continued and she said: those poor people! How they must have suffered to do such a thing as a last resort. How could we not have noticed and responded to them before they were reduced to such horror and violence against others in despair and rage? And others continued: All my relations. We are so sorry, all my relations.

The tourists left awkwardly and silently. I stayed and listened to the talk. The Pueblo people had been asked often what they thought of what happened that day and their response was measured and always the same — we are all one and we must learn that, and begin to take responsibility for the horrors around the world — the ones that are the product of military choices, economic systems, and nationalistic power. Nothing comes out of nowhere, these things are always the result of many choices, history and things that have been ignored and allowed to swell and fester.

Until we start here, bending, learning to be flexible and not to just react to all that happens in the world with violence, wars, terror, heightened security measures, imprisonment and profiling, predicated on fear and hate of others, we can have no hope that there will never be another 10th anniversary of anything like this again — anywhere in the world. It is time for hope, for forgiveness — that gives acknowledgement of what was done, and its causes and a firm purpose that those circumstances will no longer be a reality in the world.

We must begin the process that will undo the harm that was done — by others against us and many in the world community — and then the harm that we set in motion that spread like contagion to many other parts of the world affecting others who had nothing to do with what happened on our land. We must forego the rage, the hate and the systematic violence of military and security measures. We must forebear that we live in a world of nearly 7 billion people all struggling to survive with gracefulness and live with a measure of human dignity and that we cannot take for granted all that we have, and how we got it, while others barely have a chance at life.

We must forgive — beginning with the words, as a mantra that can transform our minds and souls so that we do not think of all others as possible enemies but as possible neighbors, allies and friends. And then we must forget — in the sense that we must make new memories, start relationships anew, open doors of possibility with different ways of relating to one another as equals, both and all intent on living with abiding justice and peace.

There is a story told in Acts in the New Testament about a man by the name of Joseph — originally. He is traditionally the man who wasn't chosen to replace Judas after the coming of the Spirit upon the new community of those who believed in the resurrection and the power of life. Later we find him surfacing again and his name is Barnabas. This time he is standing up for a man named Saul, who is later named Paul who first appears in Acts holding the cloaks of the mob that stones Stephen the deacon, the servant of the poor, to death. Saul went about dragging the Christians out of synagogues, and persecuting them in the courts and turning them over to authorities — seeking only to destroy this new "infestation" that he saw as something that had to be eradicated by any means.

But then, Saul has a conversion and after a period of time starts preaching the religion of Jesus — no violence, love your enemies and do good to those who persecute you, pray blessings upon those who curse you, etc. And as might be expected no one wants anything to do with him. They have long specific memories of him and what he did to their loved ones. It is Barnabas, long respected in the community that stands up for him and goes with him as he preaches, so that others get used to him, and begin to listen to him. Without Barnabas, Paul would have gotten nowhere and the history of Christianity among other peoples besides the Jewish community would not have happened.

What is fascinating is that the name Barnabas means "son of encouragement" — he became the meaning of his name in public, in relationships, and in the larger world of religion and life. It is time for all of us to have a middle name — Barnabas — the sons and daughters of encouragement, of hope and possibility. We must wear hope like skin and realize that all skin, no matter it's hue covers the same bones, blood, muscles and heart as ours and we are all one. We must start with the mantra of "All my relations" and we must learn to be patient with one another as we all are called to be transformed — or simply to go from being in bud to expanding and stretching out in bloom. We must be known for our hope in the transformation of all people, all nations (beginning with our own) and in our immense capability for humanness.

The word "hope" comes from the Indo-European root word that means to stretch, to expand . . . and we must inaugurate the time of the world's expansion to include all as one. So that in another decade when we come together to tell of the courage, hope. and compassion of so many individuals that day ten years ago, and those that followed in their footsteps we will be celebrating a new world born of encouragement and hope. As Arundhati Roy says: "Not only is another world possible, she is on her way. On a quiet day I can hear her breathing."

We breathe as one: Come!

This reflection was contributed to Spirituality & Practice for the anniversary of 9/11. Megan McKenna is a Catholic writer, a peace and justice activist, and one of our Living Spiritual Teachers. 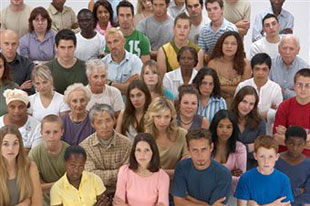