A suggestion that we make pie as an appropriate gift for the anniversary of 9/11.

Our common humanity transcends the oceans and all national boundaries . . . Let it never be asked of any of us what we did when we knew another person was oppressed.

Ten years already! If we were celebrating a marriage or a relationship or a covenant we would be looking for traditional gifts to share that reveal our hopes and what has been seeded in this past decade. And even though the anniversary we are marking is one of violent interruption, brutal destruction, and senseless killing of so many people from so many countries we must seek to honor and give gifts to each other. But even more importantly we must seek to redeem the past by what we do now in the present so that the future is never repeated.

Oddly enough the traditional anniversary gifts for ten years — considered the first significant milestone in a relationship — are symbolically apropos for this sadder, more somber day when we are grieving the memories of those lost by living in their honor with grace that endures and with lives that speak of belief in a life stronger than death, and forgiveness and reconciliation that are stronger than vengeance and retaliation with violence.

The symbols of ten years together are tin and aluminum, according to such lists of appropriate gifts. It is thought that the durability, yet the pliability of these metals are indicative of what is necessary in a relationship. How flexibility is essential and that learning to bend without breaking is crucial to not only survival — just hanging in there, but of creating something new together.

We have had ten years to look at how we react to violence and to ponder what we did to others in our grief and rage and it is not easy to look at. But the foundation of any life, any relationship even among nations, let alone among ourselves, is integrity and honesty. Sadly, we reacted not only in kind, but with an escalation of destruction, war and terror that dwarfs what we experienced that day in September so long ago. Since then we have wasted and thrown away not only the goodwill of the world that grieved and was shocked with us, but we have spent more than 1.2 trillion on wars in Iraq ($792 billion) and Afghanistan ($446.5 billion). [from the National Priorities project costofwar.com]. This does not include the annual budgets for defense that have been as high as $174 billion for 2008.

As shocking and as senseless as this squandering of resources is, it is as nothing when weighed against the loss of human life. The numbers who have died in Iraq, in Afghanistan from the United States and coalition forces is near 7500, and that doesn't count each life that has been wounded and altered forever in marriages, families and friends. And we will probably never know how many hundreds of thousands have been similarly killed and wounded among ordinary people in Iraq and Afghanistan. What have we done that is any different than what we felt was done to us, except that our scale of destruction is massive and far more ranging in its effects?

Gifts of tin and aluminum — here in New Mexico we have a folk-art tradition of making crosses of beaten tin, etched with markings — diamonds, stars, a design of beauty along the edges and a symbol in the middle of the cross — sometimes they put a picture inside, but more often the tin itself reveals a piece of loveliness and stark grace. These are gifts to share and pass along.

And probably more common to anyone in the world is the gift of tin or aluminum pie plates — for making peace pie or peace cobbler. Whether they are round or oblong, these implements are essential for concocting food for the body and soul, meant to be shared with others — pot luck, picnic, planned desserts that are easily transported when visiting others. It is time to feed the earth, all the earth for most enemies are merely very hungry people — hungry for food, for acceptance and friendship, hungry for a life with dignity and some breathing space to share with others.

Peace pie, a bit more formal and organized, is for those moments to be savored, rare moments when all is well and all have enough and all have a modicum of contentment and freedom from the drain of just surviving and can rest a bit to share with others. Peace cobbler is a bit more like the everyday throw-together living that brings peace — cobbling together whatever is at hand, whatever is in season, whatever you can get your hands on — with fruit and nuts, granola, brown sugar, cinnamon, nutmeg, cornstarch, sometimes even yogurt, a bit of juice, eggs, honey, etc. — and fashioning something that may look a bit rough but tastes great. We think of food like this as comfort food — but in reality it's peacemaking to be shared food. And we have to learn how to do it with various ingredients that don't appear to go together well or easily but also among peoples and geographies, religions and daily life that taste great when mixed with intent, and always, those ingredients — friendship and hope.

I was going to include recipes for a fast peace pie and a cobbler but then thought — everyone has old recipes that need to be dug out and resurrected, retried and shared with others. And we can borrow and lend with our neighbors from other countries and traditions. Perhaps this simple practice can lead us to look to our relationships with others, not just as individuals or even neighborhoods but as nations in the cobbler that is the world.

After ten years we must start anew — we must look at ourselves with truth, soberly and acknowledge that nothing changed that day in the arena of politics, militaristic, and economic policies. There were no shifts in our perceptions of who we are as the United States in the larger world community — we keep saying the Twin Towers were destroyed — but it was the World Trade Center, the focus of multi-national power bases that were the target because of the suffering, malnutrition, violence and inhumanity that globalization has inflicted on countless other human beings around the globe.

We need to begin by looking at ourselves as a one nation among many and realizing that we are a huge extended family, densely interconnected and intimately one, with the borders of nations and the alliances of religion external to our common humanity. Thomas Merton once wrote: We are all one — we just keep forgetting. We must remember and put our world back together again with gentleness and firmness, with imagination and creativity. It is not an option. It is now a necessity. It must be our primary practice and expression as people.

Now it's time to make some pie and cobbler — with the first ingredient — peace upon you! Paz, paiz, shalom, salaam — in every language and taste, every religion and possibility and person.

This reflection was contributed to Spirituality & Practice for the anniversary of 9/11. Megan McKenna is a Catholic writer, a peace and justice activist, and one of our Living Spiritual Teachers. 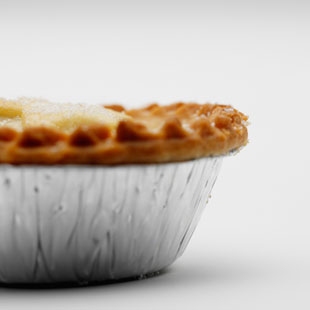