Revenge is on top at the movie box-office. But what do the spiritual traditions teach about how we should respond to violence and injustice?

(Originially written in April 2004) The announcement of last weekend's movie box-office receipts certainly caught our attention. Predictably, at the top was Kill Bill, Vol. 2, director Quentin Tarantino's ultra-violent saga starring Uma Thurman as a former assassin who, after being shot at her wedding, embarks upon a rampage of revenge, killing all her former colleagues and finally getting to her main target, Bill, the boss and the father of her child. In second place was The Punisher, about an ex-FBI agent who gets even with the crime boss who wiped out his family.

"A very big weekend for revenge," said Paul Dergarabedian, president of box-office tracker Exhibitor Relations, according to an Associated Press story. "Revenge in movies is very cinematic. Everyone lives vicariously through characters in movies, and they can safely get their revenge fix without actually doing it themselves."

So now revenge has become a "fix," something considered to be quite normal in daily life. To cash in on moviegoers' fascination with violent retribution, Denzel Washington's new film, Man on Fire, about an ex-CIA operative/assassin scheduled to release Friday nationally, was moved up to Wednesday in New York and L.A.

All this in the same week that Israel killed Hamas leader Abdul Aziz Rantisi for his part in planning suicide bombings in Israel, and Hamas then vowed to commit 100 acts of revenge in response to the assassination. Meanwhile, some politicians continue to encourage the public perception that the War in Iraq is one way to strike back at the terrorists who attacked the United States on 9/11. And so the eye-for-an-eye cycle continues.

The world's spiritual traditions offer us attitudes and actions to help us deal with both violence and the impulse to revenge. The readings below explore the nature of the problem and what we can each do about it. But first, before some fan of the Kill Bill movies writes to tell us to "lighten up" and recognize that it is "just harmless entertainment," we want to acknowledge that the violence in the movie is presented as exaggerated, comic book-like mayhem, with a dash of horror on the side. But far more impressive than all the kung fu kicks and the ingenious methods used to humiliate and murder would be what is missing in this story — any sign of forgiveness and reconciliation. Along that line, we offer this story, which we found in Anthony de Mello's The Heart of the Enlightened.

"Buddha was once threatened with death by a bandit called Angulimal.

" 'Then be good enough to fulfill my dying wish,' said Buddha. 'Cut off the branch of that tree.'

"One slash of the sword, and it was done! 'What now?' asked the bandit.

"The bandit laughed. 'You must be crazy to think that anyone can do that.'

" 'On the contrary, it is you who are crazy to think that you are mighty because you can wound and destroy. That is the task of children. The mighty know how to create and heal."

Occasionally, we will provide you with links to websites where you will find a relevant reading or practice. 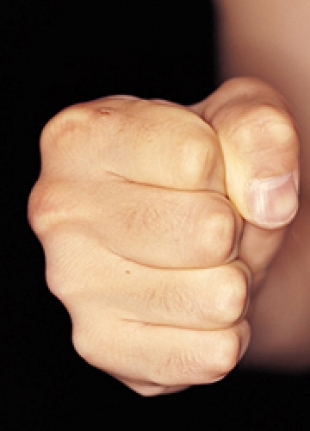