The Spiritual Practice of Hospitality

Readings and practices in tune with the broad trend toward religous tolerance in the United States.

Hospitality and hostility are both derived from the same root word but they couldn't be more different. Whereas hospitality is about welcoming all, hostility thrives on insider/outsider conflicts. In recent years, we have seen hostility raised to new levels due to terrorism and the war against it, which has increased the perception that outsiders are potential enemies out to destroy us. To counter this trend, we are challenged to adapt and hone the spiritual practice of hospitality. It involves being willing to take risks to welcome individuals as well as the broader goal of staying open to the insights of cultures other than our own. On the spiritual journey, the first step is learning about and being respectful of the insights of the world's religions.

On this front, our spirits were lifted by the good news in the results of a survey by the Pew Forum on Religion and Public Life. The report, the U.S. Religious Landscape Survey, found that 70 percent of Americans affiliated with a religion or denomination agreed that "many religions can lead to eternal life," including majorities among Protestants and Catholics. Among evangelical Christians 57 percent agreed with the statement, and among Catholics, 70 percent did. Among minority faiths, more than 80 percent of Jews, Hindus, and Buddhists agreed with the statement, and more than half of Muslims did. In another survey question 68 percent of Americans say there is more than one true way to interpret the teachings of their religions.

The Pew study, like others before it, finds Americans claiming to be deeply faithful — 92 percent say they believe in God. But conceptions of God vary — 60 percent see God as a person, while 25 percent, including pluralities of Jews, Buddhists, and Hindus, believe God is an impersonal force. The study also showed that there is more diversity within the religious communities that is usually assumed. And there is movement among faiths; more than a quarter of adult Americans have left the faith of their childhood to join another religion or no religion.

But for us, the best news is the area of hospitality among traditions. "Even though the country is highly religious, most Americans are, in fact, not dogmatic about their faith," said Luis Lugo, director of the Pew Forum (see his video presentation of the report here). This broad trend toward tolerance is a sign that religious pluralism in the country is resulting in people being more open to people of other faith perspectives. We have certainly found this to be true of the thousands of people who have taken our "Practicing Spirituality" email courses on the religious traditions and have participated in the online Practice Circles sharing their views and practices with others from around the world. Our experiences concur with those of Rice University sociologist D. Michael Lindsay: "As Americans rub shoulders with people of other religious traditions, they are less judgmental, and less likely to offer pronouncements about other people's eternal life."

We encourage you to explore your own attitudes toward religious pluralism, tolerance, and the spiritual practice of hospitality. Here are some readings and practices to get you started.

A Rumi Poem that Sings of Hospitality
The thirteenth century mystic Rumi sang the praises of all the world's religions. When he died, his funeral was attended by Muslims, Christians, Hindus, Buddhists, and Jews. In this poem translated by Coleman Barks, Rumi points out how all religions are singing one song.

Amos Yong's Call for Religious Collaboration
Amos Yong, a professor of theology and a clergyman with the Pentecostal Assemblies of God Church, makes a good case for the spiritual practice of hospitality in a postmodern and pluralistic world. He uses Diana Eck's "Pluralism Project" as a launch pad for his own exploration of America's multicultural and multireligious flavor. Now is the time, he asserts, for collaboration across religious lines in our work for the common good.

The Hindu Saint Sri Ramakrishna as a Model of Hospitality
In Sri Ramakrishna, The Face of Silence, Swami Nikhilananda and Dham Gopal Mukerji show how this extraordinary Hindu spiritual teacher experimented with other religions and "lived a life that verified the inner reality of all religions."

Hospitality as the Sturdy Thread That Binds Us Gently to Each Other
Thea Jarvis, a Catholic, salutes the spiritual practice of hospitality as more useful and important than ever in our fast-paced and ever-mobile society where intimacy is often smothered by isolation and loneliness. It enables us "to function with grace and dignity." With an even more powerful description, Jarvis describes hospitality as "background music to the human dance, an old song that still rings true."

The Spiritual Life as a Rich Blend
In Sitting with Sufis: A Christian Experience of Learning Sufism, Mary Blye Howe describes how she was drawn to the mystical life of Sufism. Her description of her quest shows us the ways in which one can enrich one's primary religion by seriously engaging with other religions.

Marching Orders for Practicing Spiritual Hospitality
In Finding Your Religion: When the Faith You Grew Up with Has Lost its Meaning, Scotty McLennan outlines a practice that allows us to remain true to our original faith while being open to other spiritual options.

Prayer by Hasidic master Reb Noson of Breslov
In The Flame of the Heart, David Sears of the Breslov Institute shares this prayer by Reb Noson of Breslov (1780 - 1844), which exemplifies a stance of hospitality. Use it as a spur to being kind to strangers.

A Service of Reconciliation
In She Who Prays: An Interfaith Prayer Book, Jane Richardson Jensen and Patricia Harris-Watkins share a service of reconciliation that demonstrates the spiritual practice of hospitality. This devotional practice illustrates the kind of bridge-building that can take place as a result of interfaith respect. 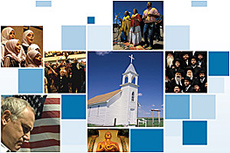