Honoring the French Jesuit by acknowledging the velocities of God's grace in the present moment.

Jean-Pierre de Caussade (born 1675) was a French Jesuit who died on this day in 1751. He was appointed spiritual director of a community of nuns and decided to share with them his ideas on the spiritual life. The material was published a century after his death as Self-Abandonment to Divine Providence. The book has become a Christian devotional classic.

De Caussade gives us a rich and imaginative appreciation for the many ways that God speaks to us and others in the present moment. He also has a strong sense of everyday spirituality; in one passage, this eighteenth century spiritual director states that we are the sequel to the New Testament that is being written by the Holy Spirit. He challenges us to read "the book of life," the record of divine action in the world, because we each have a divine purpose "in the plot of the Holy Scripture which unfolds every day."

Reflect upon one of these quotations from de Caussade's writings.

Make Use of Everything
"Those who have abandoned themselves to God always lead mysterious lives and receive from him exceptional and miraculous gifts by means of the most ordinary, natural and chance experiences in which there appears to be nothing unusual. The simplest sermon, the most banal conversation, the least erudite books become a source of knowledge and wisdom to these souls by virtue of God's purpose. This is why they carefully pick up crumbs which clever minds tread under foot, for to them everything is precious and a source of enrichment. They exist in a state of total impartiality, neglecting nothing, respecting and making use of everything."
— from The Jesuit Guide to (Almost) Everything by James Martin

It is the Lord!
"Jesus Christ, after his resurrection, surprised the disciples when he appeared before them in disguise, only to vanish as soon as he declared himself. The same Jesus still lives and works among us, still surprises our souls whose faith is not sufficiently pure and strong. There is no moment when God is not manifest in the form of some affliction, obligation or duty. Everything that happens to us, in us, and through us, embraces and conceals God's divine but veiled purpose, so that we are always being taken by surprise and never recognize it until it has been accomplished. If we could pierce that veil and if we were vigilant and attentive, God would unceasingly reveal himself to us and we would rejoice in his works and in all that happens to us. We would say to everything: 'It is the Lord!' And we would discover that every circumstance is a gift from God; that human beings, frail creatures though they are, will never lack anything; and that God's unceasing concern is to give them what is best for them."
— from The Sacrament of the Present Moment

Make it your regular spiritual practice to notice and be thankful for God's movement in your life. 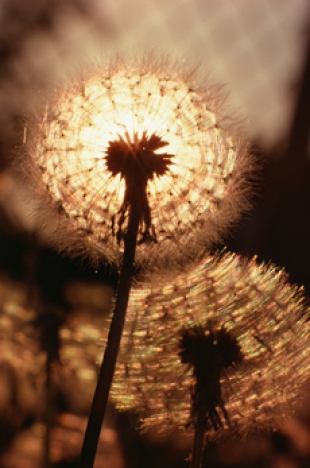