After 9/11, Pieta for Darfur and Iraq, Solstice An Art Meditation for the Anniversary of 9/11 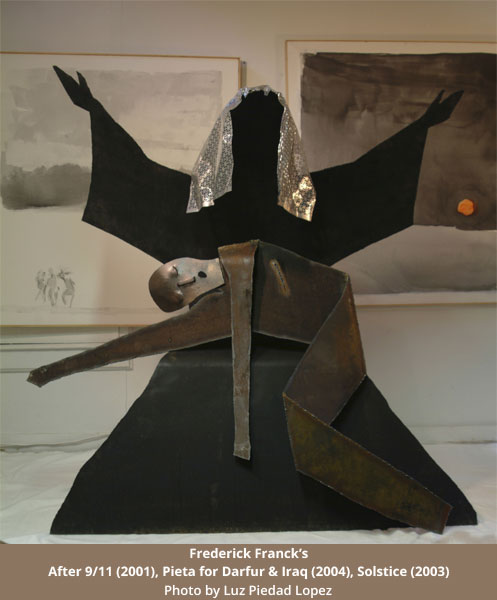 For the anniversary of 9/11, we offer for your meditation a sculpture and two paintings (behind the sculpture) by the artist Frederick Franck. We remember him fondly and have more about his inspirational life and work in our Remembering Spiritual Masters Project.

Recently, Frederick's wife Claske shared the story of his 9/11 painting. Not long after that sad day, Frederick traveled from his home in Warwick, New York, to the Hudson River, along whose banks the Twin Towers once stood. In a peaceful place up-river from New York City, the artist noticed some children playing. That moment became an ink painting. It hangs in the Franck's home next to a later painting made on the solstice in 2003.

In front of the paintings is Franck's sculpture "Pieta for Darfur and Iraq." In his book The Icon Reborn, the sculptor describes its genesis:
"It must be at least thirty or forty years ago that in a French book on medieval art I saw a double-spread reproduction of the 'Pieta of Avignon,' attributed to Enguerran Charonton around 1450. Years later, remembering this masterpiece, I decided to see the original and drove from Paris to Avignon, a trip of some 360 miles. Arriving in Avignon I tried to find the 'Pieta' in the cathedral and various churches in vain, until I approached a distinguished looking older man who smiled politely and told me that the 'Pieta of Avignon" had for many years been in the Louvre! I did not turn around to drive back to Paris, but never forgot the impact of this irresistible work of art.

"I am no longer very mobile and glancing in the paper yesterday at the horrors of the tsunami, of decapitations and car bombs in Iraq, I noticed my wheelchair standing in front of me. It transformed itself at once into the 'Pieta.'

"I took a large piece of cardboard and cut it into a rough template of the Madonna carrying the corpse of her son on her knees. It fit my wheelchair.

"There was not a second of doubt or hesitation. I only changed the position of the Madonna's arms — which in the original 'Pieta' are folded in front of her in prayer — and made her stretch them out in a gesture of absolute despair.

"I was shaking all over, but my hands were steady.

"Together with my assistant/welder Bruce Bernardo, I cut both figures out of steel. At the end of the day the sculpture was complete in its frightening simplicity and I felt it to be the most powerful, significant and deathless icon I would ever make.

"This seems to be my way of 'designing' which is a radical 'non-designing.' It is an instant apparition on the retina — or perhaps on the inner eye — that irresistibly demands to be given material form."