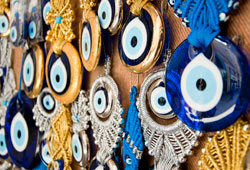 The words amulet, mascot, charm and talisman have revealing origins. "Amulet" comes from the Latin amuletum, but some claim that its true origin is to be found in the Arab term hamala, meaning "to carry". An amulet is defined as "anything worn about the person as a charm or preventative against evil, mischief, disease or witchcraft".

"Mascot" comes from the French (Provencal) term masco, meaning a witch. This, in turn, came from an old French word, mascotte, meaning "a mask" and referring to the mask worn by a sorcerer. Originally it indicated a person or a thing that brought good luck, but it gradually became more limited in meaning, referring mostly to small "lucky objects".

"Charm", rather surprisingly, comes from the Latin word carmen, meaning a "song". It relates back to the uttering of magical chants which led to a condition of "enchantment".

"Talisman" comes from the greek telesma, meaning "consecrated object" — an object consecrated by the completion of a religious ritual. A talisman is defined as "a stone, ring or other object engraved with figures or characters, to which are attributed the occult powers of the planetary influences and celestial configurations under which it was made; usually worn as an amulet to avert evil from or bring fortune to the wearer; also medicinally used to impart healing virtue". In other words, a talisman is an amulet that carries a magical or sacred inscription. To be a true talisman, it must display some lettering, numbers or text, or an abstract symbol or pattern of some kind.

One other term that deserves a special mention is the Evil Eye. Although amulets are intended to protect their owners from various kinds of misfortune, this leaves open the question of where these misfortunes come from. They may, of course, be completely random. You suffer from them simply because you are in the wrong place at the wrong time. Or they may be the result of stupid or ignorant actions for which you yourself are directly to blame. But superstitious people find both randomness and personal blame hard to accept. They feel that if something bad suddenly happens to them, it must be the result of a supernatural, hostile force.

This "dark power" has often been conceived as an Evil Eye that transmits its harm simply by staring at its victims. To survive its attack they must somehow avoid eye-to-eye contact. They can do this by confronting it with something it dislikes or fears or by distracting it in some way. Many amulets are designed with this in mind.

There are three kinds of Evil Eye. First, there is the "innocent" or involuntary Evil Eye. Particular individuals gain a reputation for possessing an Evil Eye that is not under their control. They mean no harm, but they cannot help causing it. They usually gain their reputation because, after they have paid a visit somewhere, there is a sudden and unexpected tragedy. Having no other explanation, people assume that the visitor must have been the cause of it. Sometimes an individual with a squint or some other minor defect is automatically assumed to possess the "Eye". The second type is the malicious or malevolent Eye, possessed by someone who deliberately sets out to cause harm. And the third is the more nebulous, unseen, disembodied, occult Evil Eye.