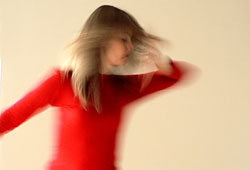 "I would believe only in a God that knows how to dance."
— Friedrich Nietzsche

The Divine, holding out a hand like a lover or an old friend, eyes expectantly on us, utters five golden words: "May I have this dance?"

Though we feel as if we are nothing but elbows and knobby knees, we can't resist. We take one step toward the Great Dancer, holding our breath, certain the next words will be, "So you think you can dance?"

Instead, the Holy moves with us, matching us so perfectly that each pulse, sway, and point of pressure that we apply is validated as perfect. We've never moved with such grace.

One Sunday morning, at the end of a weekend workshop, I invited people to dance in relationship with the One-They-Turn-To. For fifteen minutes there was only music, morning light, and bodies alternately moving and sinking into stillness. A woman who had just lost her rabbi to a tragic drowning felt her dancing salve her grief. A seventy-year-old Episcopal priest let joy guide her after years of fighting for human rights. A man preparing to marry his beloved let his heart open wider. A bereaved woman drained by care for her mother refreshed herself in the healing waters of movement. An astrophysicist who has studied the birth of stars remembered the mystery of her own body. When the dance was over, their faces were radiant and peaceful. There is nothing I love more than companioning people who are discovering movement as a spiritual practice.

At the beginning of nearly every culture, dance arose at the foundation of collective spiritual life. Just as inconceivable as separating out deities and goddesses from everyday activities, dancing was intrinsic to the religiosity of indigenous groups. It could not be extricated. It was manna, daily bread. More than mere expression, dancing served as the primary means of knowing and creating the world. It carried technologies of healing, entertainment, and most definitely of praying.

Those who study Judaism and the Bible discover that dancing is embedded in the fabric of worship, language, and Jewish ritual. From the beginning, God moved over the face of the deep, psalms were sung with timbrel and dance, and prophets like Isaiah declared, "You shall go out with joy and be led forth in peace: The mountains and the hills shall break forth into singing, and all the trees of the field clap their hands" (Isaiah 55:12). Dancing has always allowed the Transcendent to move among us.

One of my favorite examples of dancing hidden in these sacred texts is found in the Hebrew word for festival, hagag, meaning "to move in a circle." Jewish festivals and High Holy Days include circle dancing, not as an afterthought or an add-on to the important parts of ceremony, but as sacred containers into which the spiritual truths of community were reliably and regularly sealed, revealed, and renewed. Not to dance would be like not worshiping.

So, too, for the first Christians. Did Jesus dance? His presence at the wedding at Cana, his description of rejoicing at the reunion of the prodigal son, which included the instruction to kill the fatted calf and make merry, his instruction "to rejoice and leap for joy" (Luke 6:23) — these put him in the thick of dancing. And if he himself didn't dance, certainly the earthy prostitutes, fishing people, and commoners who followed him performed dance, storytelling, and song as some of their few creative outlets.

Because dance isn't written down, there are scant records of its pervasiveness. But that doesn't mean it wasn't playing a central role. From observing cultures around the world, I tend to think that dance was such a common, collective prayer form that no one would ever imagine that it could become endangered. No one ever thought, "We need to protect the dance, make laws like 'Thou shalt dance.' " Dancing is joy's natural expression. To inhibit it is to inhibit the love of God.

— Cynthia Winton-Henry in Dance - The Sacred Art: The Joy of Movement as a Spiritual Practice