Rituals of Acknowledgement and Commitment

Rituals abound in a democracy: raising the flag, citizenship and swearing-in ceremonies, dispatching delegates to national gatherings, the opening of a legislative session. Faith communities can bring an additional layer of ritual to civic life. For example, after a devastating event (a terrorist or shooter attack, a climate disaster, the death of a revered leader), you could hold a service, using a call-and-response litany to acknowledge any fear, anger, and grief that has surfaced. In The Ceremonial Circle, Sedonia Cahill and Joshua Halpern describe a ritual conducted on a path where a woman had been raped. After reading poems and statements, participants passed around a rock shaped like a goddess, each one saying a prayer and making a commitment to end violence against women. The goddess was then buried along the path to reclaim it as sacred space. Similar rituals could be conducted at wildlife preserves, public parks, and other places needing protection and healing. 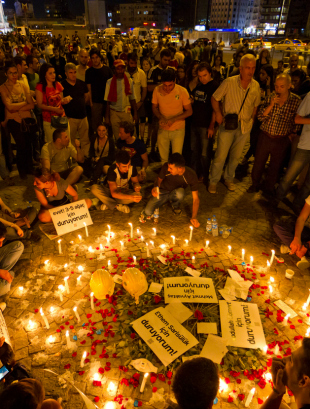