The Liberty Bell in Philadelphia, Pennsylvania — widely known as a symbol of American independence — was rung on July 8, 1776, to summon people to hear the Declaration of Independence. The bell is cast with the lettering "Proclaim LIBERTY Throughout all the Land unto all the Inhabitants Thereof", a reference to the hallowed 50th year, known as the jubilee, mentioned in the Bible (Leviticus 25:10).

In a jubilee year, liberty was to be proclaimed to all inhabitants of the country, servants and masters alike; property ownership was to revert to the family that originally possessed the property to reestablish the original arrangement regarding the division of land; and all inhabitants of the country were to live a simple life, living off of storage from previous years, allowing the land to rest. The jubilee was to be a year of spiritual and physical renewal. In "Toward a Jubilee Economy and Ecology in the Modern World," American Rabbi Arthur Waskow offers possibilities for a modern-day jubilee:

Now it's your turn to "proclaim liberty throughout all the land unto all the inhabitants thereof." Take 10 - 15 minutes to reflect on the merits of a jubilee and its possible applications for you, your workplace, and your community. Jot down whatever ideas you have without editing. Come back to the list later and read it over again before making any changes. Then discuss your ideas with a coworker and decide which ones to act on. 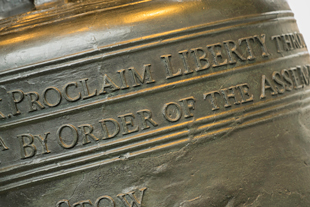