A Denizen of Time

"As I have mentioned, my spiritual director, a hermit, once smiled at me and concluded: 'The difference between the two of us is that, while life for me is a matter of passing through, for you it is a matter of drinking deeply of everything along the way.' True. I do not want to miss the aroma of even one wild strawberry along the path. That is, I want to live deeply in time in all its manifold richness.

"Perhaps it was because I was younger then, but I often remember an experience with an Atlanta elevator. At a conference in a hotel there, some friends suggested that as an 'adventure' I ride with them in a glass elevator to the top. Slowly it rose, as I took in the gothic-like panorama beneath: of water features, plants, chandeliers, and colorful people of all kinds. Suddenly we burst through the roof into momentary darkness, then into a glass tube, where stretching out in all directions were the lights of Atlanta's skyline and above it, the trek of endless stars. While still mesmerized, we penetrated through a floor into a sphere at the top. And as the doors opened, a friendly voice, with a warm handshake, bid us come and eat.

"That night, at a table slowly rotating above the glittering city below, we told stories of past, present, and future. That was when I knowingly celebrated for the first time that I was a joyful denizen of time. Even the infinite space all around was bathed in time. Just that morning I had read that an astronomer had perceived a quark twelve billion light-years hence. Staggered by it all, that night I toasted the God of time, drinking thankfully for being alive in all of time's multifarious intersections."

To Practice: Ride an elevator to a roof-top restaurant, or any other high place, and wonder at what you see.

— W. Paul Jones in A Season in the Desert: Making Time Holy 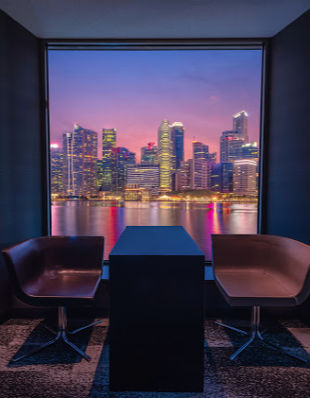