Frederic and Mary Ann Brussat have been covering contemporary culture and the spiritual renaissance for five decades. In 1972, they founded CIStems, Inc., a nonprofit 501(c)(3) organization located in New York. In 2006, they consolidated all their work on SpiritualityandPractice.com, a multifaith website providing resources for spiritual journeys.

The Brussats are the authors of Spiritual Literacy: Reading the Sacred in Everyday Life, a collection of more than 650 examples of spiritual perspectives on everyday experience, which is the basis of a 26-part film series. In that book, they introduced the Alphabet of Spiritual Literacy — 37 spiritual practices that are common in the world’s religions, around which Spirituality & Practice is organized. Their book Spiritual Rx: Prescriptions for Living a Meaningful Life recommends resources and exercises for exploring the practices. They are also the authors of two gift paperbacks, 100 Ways to Keep Your Soul Alive and its sequel 100 More Ways to Keep Your Soul Alive.

In the 1970s and 1980s, the Brussats published reviews and other resources through Cultural Information Service, a guide to contemporary books, films, music, art, and television. They also produced a series of viewer's guides to television programs and feature films, including many of the groundbreaking movies and miniseries of that era.

In the early 1990s, they decided to focus their attention on the emerging spiritual renaissance. They created the magazine Values & Visions: A Resource Companion for Spiritual Journeys, a mix of reviews and discussion guides which Bill Moyers called "the most original and refreshing guide to what’s truly valuable in American society." They have continued this positive approach to new books, spoken-word audios, feature films, and videos/DVDs for other religious and spiritual publications, including The Lutheran. They have developed discussion guides and program ideas for film and book discussion groups called Values & Visions Circles; more than 300 guides are currently available.

All these projects continue through Spirituality & Practice. Each year the Brussats identify spiritual themes in more than 300 books, 50 audios, and 300 films. They frequently write and speak about how to incorporate spiritual practices into daily life, drawing upon the riches of all the world's religions. For Spirituality & Practice, they are created 47 "Practicing Spiritualtiy" e-courses and 10 21-day program.

From 1996 to 2007, the Brussats were the Media Editors for Spirituality & Health magazine, providing book and movie reviews to the print magazine and the website. From 2001 - 2005, they were also the Web Editors for SpiritualityHealth.com, the 2005 Webby Awards People's Choice Winner for Religion and Spirituality. Mary Ann was a consultant to and a regular guest talking about films on New Morning, a daily show on the Hallmark Channel.

Frederic is a United Church of Christ clergyman with a journalism ministry, and Mary Ann is an interfaith minister, ordained by the One Spirit Interfaith Seminary. The Brussats are members of Judson Memorial Church, a United Church of Christ congregation in Greenwich Village, New York City. They are also initiates of the Mevlevi Sufi Order that traces its inspiration to Mevlana Jelaluddin Rumi. After living in New York City for 46 years, they moved in 2015 to Pilgrim Place, an intentional community in Claremont, California.

To see pictures of and read stories about the Brussats' work over five decades (put together for their 50th work and wedding anniversary), go here. 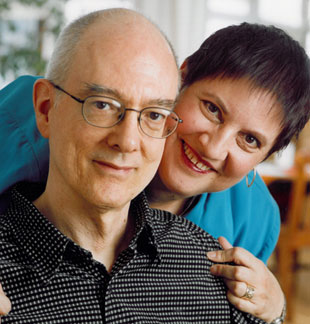