What Is Everyday Spirituality?

by Frederic and Mary Ann Brussat

Everyday spirituality has a long and rich history. It is practiced in many religious traditions and among those who call themselves "spiritual but not religious." But what is it?

First, perhaps we should say that it is not the kind of spirituality we grew up with. We were taught that spirituality was the part of religion that focused on the "inner life." It was something that you did in a special place or time, usually a quiet room at home or on retreat. It involved finding ways to connect with the divine – quietly, reverently, and usually by ourselves.

As we became familiar with more traditions, however, we discovered that many of them encouraged people to engage in a search for the sacred (one definition of spirituality) as they went about the activities of their everyday lives. Celtic Christians, for example, believed they can connect with God through household duties, work in the fields, and the lilt of a song. They invited God to join them in their daily deeds, believing that anywhere could become the place for an encounter with the Holy One. Within the Christian monastic traditions, everyday acts are hallowed and considered to be as important as devotional rituals and community worship.

Goddess religions invest nature and the body with spiritual meaning and value. Native Americans look for signs of Spirit's presence while walking in the woods, through encounters with animals, and in community gatherings. Groups within Judaism emphasize taking the ordinary and making it holy. Islam encourages believers to look for signs of God's activity in everything going on around them. Hinduism encourages recognizing manifestations of the divine in an enlightened person, a cow, a plant, or a small object. Buddhist masters the world over have helped practitioners regard the routines of daily life, from walking to cooking, as basic expressions of spirituality.

Tutors in the art of everyday spirituality have appeared in all times and places. Meister Eckhart, a 13th century Christian mystic, was always on the lookout for God in the midst of life. Brother Lawrence, a 17th century Carmelite monk and cook, examined the present moment in order to practice the presence of God. Thomas Traherne, from the same era, was an Anglican priest and poet; he saw the ordinary as a vehicle for the transcendent. He, like English poet Gerard Manley Hopkins two centuries later, held up an incarnational spirituality built upon the coming of God in the flesh. Jean-Pierre du Caussade, a French Jesuit priest of the 18th century, tried to practice "the sacrament of the present moment. And Thich Nhat Hanh, a contemporary Vietnamese Zen teacher, poet, and scholar, has written widely on the art of mindful living.

Despite this rich and varied tradition, many people still have trouble understanding and accepting how daily life can be a spiritual practice. Some are influenced by the pernicious division of the world into separate realms of the sacred and the secular. They want their spirituality to take them out of the corrupt world and help them transcend it.

Others are convinced that all divine revelations ceased with the writing of the sacred texts of the world religions. The modern world holds no new insights for them. Still others have bought the idea that only ministers, priests, and other professional religious leaders have the ability to discern the presence of God in the everyday, or that only those with special training can be trusted to know the difference between "Spirit" (assumed to be good) and "spirits" (assumed to be dangerous). The key consequence of these assumptions and apprehensions has been a separation of spiritual belief and practice from daily life.

A better understanding, we believe, is to recognize that spirituality is a way of life, and as such, it cannot be separated from our everyday activities. John Shea, a contemporary Catholic theologian, puts it this way: "The spiritual life is, at root, a matter of seeing. It is all of life seen from a certain perspective. It is waking, sleeping, dreaming, eating, drinking, working, loving, relaxing, recreating, walking, sitting, standing, and breathing. . . . Spirit suffuses everything; and so the spiritual life is simply life, wherever and whatever, seen from the vantage point of spirit."

"Every happening great and small is a parable whereby God speaks to us, and the art of life is to get the message."

At Spirituality & Practice, we affirm that God speaks to us through every happening. The venues of this divine communication are all around us, in many traditions, places, and especially in our activities. We respond to the sacred not only through classic spiritual practices like prayer and meditation but through the ordinary things we do. Taking a walk, washing the dishes, caring for a pet, talking with a neighbor can all be expressions of our spirituality.

As you browse the pages of this website, you will see us finding spirituality in books, movies, art, and the popular culture. We offer a wide variety of spiritual practices, and you find that most of them can be tried anywhere and at any time. That's because all we have to work with is this day, every day. 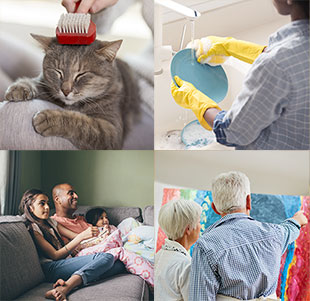