The Majesty of the Grand Canyon 150 Years in Art

By Joni L. Kinsey
A showcase for the incredible variety of impressions elicited by this national monument's sublime scenery.

In the 1991 movie Grand Canyon, Simon tells Mack what seeing this majestic place meant to him: "Those rocks, those cliffs . . .they're so old . . . It ain't done either. It happens right while you're sitting there watching it . . . When you sit on the edge of that thing you just realize what a big joke we people are, the big heads we got thinking that what we do is going to matter all that much . . . Me and my worries. It's real humorous to the Grand Canyon." That's just one person's perspective, but it says a lot about the awe this natural wonder has evoked in millions of people who have gazed upon its its primal beauty.

Joni L. Kinsey, Associate Professor of American Art at the University of Iowa, has put together an impressive overview of the history and legend of the Grand Canyon which was inhabited by indigenous people for centuries and visited by the Spaniards as early as 1540. The first artist to celebrate its natural beauty was Thomas Moran whose work prompted Theodore Roosevelt to declare it a national monument. By 1919 Congress had established Grand Canyon National Park.

Among the many artists whose paintings of the Grand are included in this sumptuous volume are John Wesley Powell, Louis Akin, Elliott Daingerfield, Gunnar Widforss, Edward Potthast, Ed Mell, Clark Hulings, Wilson Hurley, Frank Mason, and many others. The images in this stunning book convey the incredible variety of forms, colors, moods and impressions elicited by the Grand Canyon. 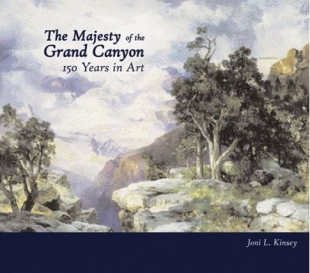