By Wendy M. Wright
Ideas about and experiences of Mary among contemporary Catholics.

In the 2010 Madeleva Lecture in Spirituality, Wendy Wright, professor of theology at Creighton University, shares her ideas and experiences of Mary and the Catholic imagination. She is featured on Spirituality & Practice as a Living Spiritual Teacher. For six years, she has discovered during private pilgrimages in her hometown archdiocese of Los Angeles that Mary, the mother of Jesus, "occupies a richly textured, imaginative space in the wider Catholic imagination. She quite literally occupies large swaths of material and temporal space. But more strikingly, she occupies a generous space in the hearts of those who speak to, look to, identify with, implore, honor and hope in her."

Wright begins with a look at the pre-eminent role of Mary in the Catholic calendar, at sacred sites, in visual imagery, and in ritual practice. She contends that the "Marian mode" is the limited, the local, and the particular. This honored woman is seen as "guardian of the common good as well as of the marginalized, the local, and the powerless."

Wright circles around to the subtitle of the book, the point verge referred to by Thomas Merton in his communications with an Islamic scholar. "The point vierge was the secret place in the center of the human soul to which God alone has access." Wright sees the Virgin Mother as being at home in the heart of devoted Catholics who find meaning in her life and mission: she opens up believers, takes them out of themselves, to serve others, even as she did. 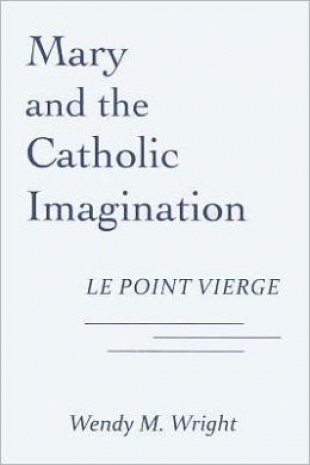