By Frederick Franck, Sally Cunneen
A subversive book that challenges us to see the Divine within, around us, and behind the faces of others.

At ninety-five years of age, prolific painter and sculptor Frederick Franck developed a new insight into his work: "I think I have been making icons all my life without being aware of it." Sally Cunneen, a co-founder of the inter-religious review CrossCurrents, Professor Emeritus of English at Rockland Community College (SUNY), and author of four books, has diligently and imaginatively applied this insight to Franck's artistic output. Whereas icons are still made for public and private use in the Eastern world, this trans-religious pioneer has taken these "windows into eternity," as they have been called, and moved way beyond Eastern Orthodoxy or Catholicism into his own unique iconography that melds Christian, Zen Buddhist, and Taoist motifs.

When he was 12, the artist painted his first icon, a Cosmic Fish. And since then he has drawn, painted, and carved many versions of this great symbol. Franck saw the "pure beauty of the Spirit" in the face of Pope John XXIII and when he began work on art for Pacem in Terris, the sculpture garden and sanctuary where he and his wife Claske live, a life-sized icon of this Christ-like Pope was one of the first to be finished.

Icons in the Eastern Christian tradition draw us deep into the mystery of the Divine, and our devotional lives are deepened and enriched. The icons of Frederick Franck at Pacem at Terris — many of which are reproduced in this paperback through the exquisite photography of Luz Piedad Lopez — take us even further on our spiritual journey. As Cunneen puts it: "Franck's icons seem to be an attempt to re-sacralize a desecrated world poetically by means of his symbolic forms, avoiding all solemn doctrinal and theological intellectualizations."

Consider this paperback and all the pictures in it as a portable icon. It is an aid to worship that goes right into the beating heart of the world where pain and suffering and injustice abound alongside the most surprising deeds of selflessness and compassion. When we first wandered through this sculpture garden and saw "The Buddha Preaching the Wordless Flower Sermon," we wanted to kiss that ineffable face. Later, we realized that Franck wanted us to see it as our own face. When we experienced the buoyancy of "St. Francis of Assisi with Birds," we felt we could touch the sky and fly. Our spirits were lifted off the ground as we sensed our oneness with the gentle saint. And pausing at "The Seven Generations," we wanted to leave behind some flowers or light some candles in tribute to those who are to come after us, those who will bear the brunt of our present-day social, political, and spiritual acts.

All of these icons humble us and hallow us. That is why gazing at the amazing array of trans-religious icons in this paperback is a subversive business. You will never be able to see yourself, the world, or the faces of others in quite the same way again. Instead you just might come to a fresh realization of the Mystery behind all mystery and the holiness that resides within you and all around you.

The Icon Reborn can be purchased at Pacem in Terris or from The Bookstore in Warwick, New York, 845-986-8880. It is a wonderful gift for yourself or someone you love. 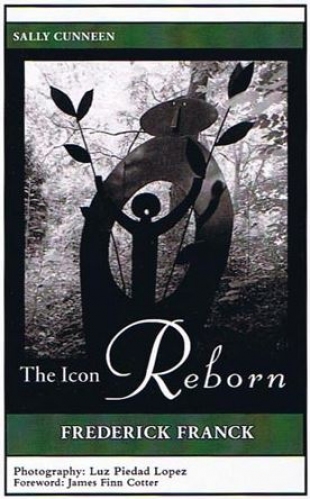