By Snatam Kaur
A compilation of eight songs from this mesmerizing devotional singer.

Snatam Kaur is a mesmerizing devotional singer. An American Kirtan singer and peace activist, she was raised in the Kundalini Yoga tradition and studied with Yogi Bhajan.

This CD of eight songs has been harvested from her previous releases Anand, Shanti, Liberation's Door, Gracem and Prem. Because much of her material comes from the Sikh tradition, she sings in Gurumukhi, their sacred language. Kaur believes in the importance of praising God.

We were completely caught up in "Jap Man Sat Nam" where she repeats a sacred sound over and over until it establishes a groove in the mind. After eleven minutes of listening, we could feel its lingering effects in our bodies. There is also healing balm in Kaur's "By Thy Grace" And "Gobinda Gobinda Hari Hari" is another masterpiece that invites you to sing along.

Linda Johnson, a founding board member of the International Kirtan Foundation has said of this kind of music:

"The sacred sounds begin to act as spam blockers for the soul, replacing the often trite or petty thoughts that may clutter the field of your awareness. In this way the practice of kirtan really does become a yogic path, reorienting you toward a more deeply spiritual life." Think of Snatam Kaur's music as a yogic path. When the chanting is done, take some time to immerse yourself in silence. Thank God for this blessing. 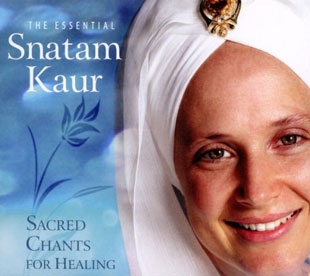