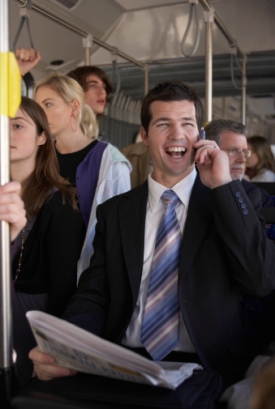 You have purposely gone out of your way to find a quiet spot in the airport where you can read your book. But before you can blink, a man strolls up talking very loudly on his cell phone. He talks on and on and you are unable to regain your concentration. The man is totally oblivious to your presence or your attempt to read. He is wrapped up in his own world.

This is a simple albeit frustrating example of cell phone abuse and there are many more to consider. How many times in crowded places or on trains and buses have you and the ten people around you been irritated by the alarming ring tone of a very popular cell phone? What about people who absolutely must take a call while driving? Despite the laws against this activity in many states, few follow it since they are convinced that they should have the freedom to speak on the phone with anyone at any time. Yes, we humbly interject, but does that freedom include the right to put your passengers and others on the road in danger of dying in a crash thanks to your inattention?

As movie lovers, we consider it abuse when someone uses a phone with its glaring light during a movie; why is that text so important? And why is a conversation with someone who is not physically present more important than those you are sitting or walking with? We see examples of this all the time, and the same people don't notice that anybody else is on the street. In a recent poll by the Pew Research Center, 50% of cell owners say that they have been bumped into by another person because that person was using a cell phone. What goes around, comes around. Especially vulnerable to this abuse are elderly individuals lacking the speed and suppleness to get out of the way of a distracted person.

The cell phone abuse we are talking about does not require us to take drastic steps but as 1,000 new users are being added every minute globally, it is the right time for more people to practice cell phone etiquette.

Stephen Carter has written: "Civility is the sum of the many sacrifices we are called to make for the sake of living together — a sign of respect for others." All the spiritual and wisdom traditions agree with this approach and emphasize the practice of putting others before us in all things. Helen Luke said the same thing another way: "A courteous person will always make everyone around him feel at his best and most alive!"