Posted by Frederic Brussat on December 30, 2014

We recently shared on this blog the results of a survey of American airline passengers conducted by the travel engine Expedia. We listed the ten top etiquette violators on planes.


Now after New York's Metropolitan Transportation Authority announced a new subway etiquette campaign, The New York Times asked readers what behaviors irritated them the most. Here are some of the complaints about fellow passengers: 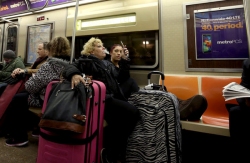 * Men who spread their legs wide, into a sort of V-shaped slouch, effectively occupying two, sometimes even three seats. This selfish behavior is called manspreading.

* Women who spread out with shopping bags or extra paraphernalia for their children in large carts.

* Standing passengers who are completely oblivious to slamming their backpacks into the rib cages of other passengers.

* Passengers with the sound turned up so loud on their music that the beat comes out of their headphones.

* Door Hogs who refuse to step aside and let others in or out of the car doors.

* Riders who lean on poles, preventing others from holding on.

* Those who thoughtlessly take bicycles on crowded trains.

* Litterbugs who discard trash and leave it behind on subway seats or floors.

Transit officials have stated that being thoughtful of others has become more important as increased numbers are using the New York City subways; more than six million people took advantage of the extensive system on recent days.


In the future when cities are going to become even more crowded, it is very wise for transit officials to do what they can now to help promote etiquette in regard to these space-related incursions.