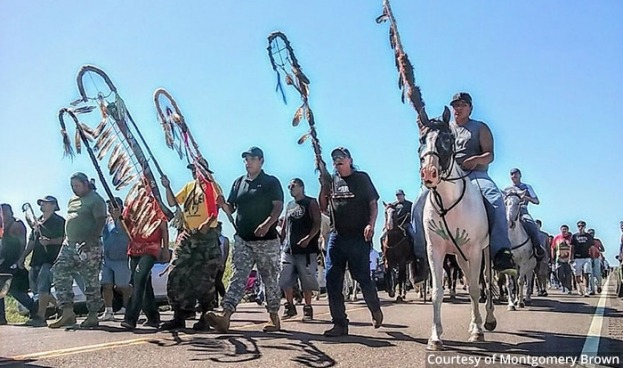 A Prayer for Protection of Sacred Lands and Waters

Posted by Frederic and Mary Ann Brussat on August 24, 2016

Great Spirit, you have created a beautiful world for us to live in. You have sent rains and snow to fill our rivers. You have made the land rich in nutrients for our plants and animals. We want to show our gratitude by protecting these gifts. And so we are troubled by what is happening in North Dakota.

News: Dakota Access, a non-Native American company, plans to construct a 1,172 mile pipeline from oil fields in North Dakota through South Dakota and Iowa to Patoka, Illinois; it would transport up to 500,000 barrels of fracked crude oil per day. On July 25, the U.S. Army Corps of Engineers granted authorization for the pipeline to cross the Missouri River and Lake Oahe. The pipeline would thus cross waters considered sacred by the Native tribes and pass through treaty lands a half-mile from the Standing Rock Sioux reservation. Since the Army Corps decision, tribal members and their allies from across the country have been staging a nonviolent protest to stop the pipeline. In Yes magazine, Mark Trahant discusses the significance of this Native American response.

Construction has been halted awaiting court action on a lawsuit filed by Earthjustice on behalf of the Standing Rock Sioux tribe, which claims that the construction and operation of the pipeline threatens the Tribe's environmental and economic well-being, and would damage and destroy sites of great historic, religious, and cultural significance to the tribe.

Meanwhile, thanks to an awareness campaign launched via Facebook, Twitter (#RezpectOurWater), and other social media, the protest has grown to several thousand people with representatives of other Native American nations arriving every day. They have set up a "Prayer Camp" to pray for protection of their sacred lands and waters.

Grandfather, Great Spirit,
Thank you for this life.
As you have taught us to honor our Mother, the Earth,
now help us show others how to respect your creation.
Strengthen us as we stand up on your behalf to
protest what powerful interests in the fossil fuel
industry and government officials swayed by their
arguments are planning to do by building a pipeline
across four states and our sacred lands.
Help us educate people about the catastrophic
effects of an oil spill on the Missouri River and
the water supply for so many communities.
Help us communicate well so that we can live in
peace with all our brothers and sisters and
all our relatives in the natural world.
Protect us during our protests and
protect our water and our sacred lands.
Aho!