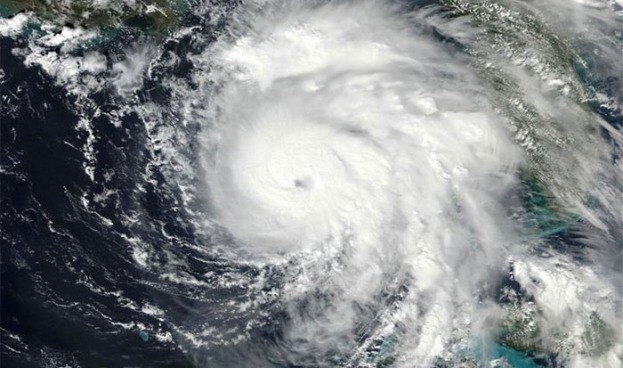 A Prayer for Our Role in Climate Change

Image credit: Hurricane Michael on October 9, 2018, from the National Aeronautics and Space Administration

As of this writing in October 2018, we're facing into the devastation of the third strongest storm ever to hit the United States: Hurricane Michael, with sustained winds of 155 mph and unusually low central pressure. At least two people are dead, thousands lack power, and we're only beginning to assess the ravages to homes and businesses.

Meanwhile, the Weather Channel reports "Waterlogged Carolinas Brace for Flash Flooding, Possible Widespread Power Outages" as Michael heads north into areas that have not yet begun to recover from September's Hurricane Florence, which brought storm surges and heavy coastal and inland flooding. And the Indonesian island of Sulawesi will be reeling for years after a 7.5 magnitude earthquake and tsunami on September 28 left more than 2,000 confirmed dead, with as many as 5,000 more still missing. And a year after Hurricane Maria, we are still asking whether Puerto Rico can recover.

If it isn't already obvious, we could keep adding to the list of "and this, and that" disaster. CNN's John D. Sutter, in an article on "How to talk about hurricanes now," points out that we're misplacing blame when we call these events "natural disasters:"

"The phrase 'natural disaster' is an attempt to lay blame where blame really doesn't rest," said Kerry A. Emanuel, a professor of atmospheric science at MIT and a global expert on hurricanes.

It's not about semantics, said Ksenia Chmutina, a lecturer at Loughborough University in the United Kingdom. She and colleagues issued a news release this year asking journalists to banish the phrase from our lexicon. "By blaming nature on disasters, we're saying there is nothing we can do about this -- we can't do anything to reduce the risks. Which is not the case."

After describing the various human-related factors feeding into these weather events that can no longer fittingly be called "natural disasters," Sutter quotes Katharine Hayhoe, a climate scientist at Texas Tech. She suggests an alternative phrase which, aptly, is quite a mouthful: "what used to be entirely natural disasters ... now amplified or exacerbated by human-induced change."

As we look at what "human-induced change" is doing
to the Earth, our home, and to our sisters and brothers,
we recognize with sorrow that countering changes are needed:
changes of heart, changes of mind, changes of actions.
Today we pray by looking within at the light kindled in our hearts,
blowing it into a stronger flame if needed.
We pray by taking that flame and using it to illumine
our own ways of being in the world:
first, so that we can rightly and helpfully respond
to those in immediate need
due to disasters in which we have played a part
by our unconsciousness and greed, and
second (but just as immediately) so that we can again, today,
do one thing less to harm Earth and one thing more
to treat her with exquisitely loving respect.

May we each day rekindle the flame
and look again at how to manifest reverence
towards Earth and all her creatures.


Next Post: Praying for the People of Indonesia after the Earthquake and Tsunami