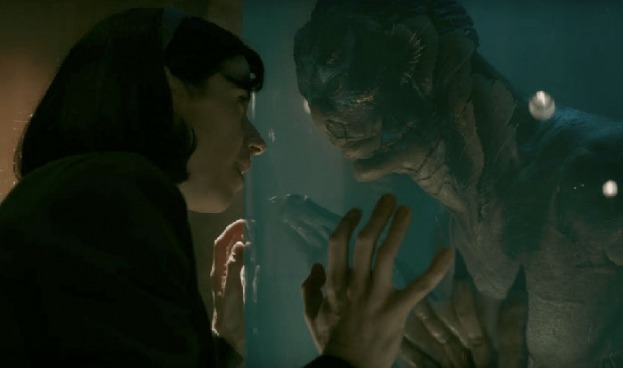 The Shape of Water in Process Perspective

Last night I saw The Shape of Water written and directed by Guillermo del Toro, and this morning I read Frederic and Mary Ann Brussat’s review of the marvelous film. The Brussats offer numerous themes to reflect upon: dancing, hope, monstrosity, torture, evil, love, and the role of water in human life, as made clear in the title. In their words: “Finally, there is the film’s title. In many spiritual traditions, water is a metaphor for the omnipresence of the divine. In Mathnawi II: 1020-1, Rumi seems to be describing Elisa’s choice:

“Know that the outward form passes away
But the world of reality remains forever.
How long will you play at loving the shape of the jug?
Leave the jug; go, seek the water!”

Those of us in the process tradition will appreciate the idea that God is omnipresent and that God adjusts to each new shape by conforming to it, all in a spirit of loving embrace. We're all for the water God.

We also believe that — in moments of faith and courage, love and wonder, zest and delight, justice-making and creativity — we are swimming in God, not unlike the way in which Elisa and the Fish Man dance together. I know about finding God in water in a literal way. I first found the aquatic side of God, not only in the warmth of human love, but by swimming underwater in the Guadalupe River in the hill country of Texas.​ I know what it is like to have water as a channel of grace.

​​I also appreciate the idea that a strange amphibious creature — a monster, a Fish Man — might be a vessel of God’s love. Indeed, such a monster might be a good bit less monstrous than we humans. We can and do act monstrously, all too often, in our cruelties and our callousness. Our societies can be monstrous, too, in their disregard for human dignity. In its depiction of prejudices against people of color and homosexuals, this disregard is one of the themes of The Shape of Water. As the Brussats put it: “Be careful now, the monster may not be who you think it is, and sometimes there are more than one. Monsters set out to destroy whatever progress we make in living lives of compassion, empathy, and love.”

In order to avoid monstrosity, we need teachers who introduce us to the shapes of holy water. There is a teacher in whose footsteps I seek to walk, a young Jew from Nazareth, who was deemed strange by many around him, and whose consciousness conformed to the poor and powerless around him, such that he became their spiritual advocate. He was considered monstrous by those who killed him, and yet it is said that he continues to live, even now, in the hopes and aspirations of many who seek to share in his journey. He, too, swam in God. He, too, was a Fish Man.

The Strangeness of Water

And yet, as a process theologian, I don't want to romanticize water in a way that neglects its strangeness. One of the values of The Shape of Water is that it does not hide from a sense of mystery, indeed a sense of fear of water. We want to swim in water but we are also aware of the fact that, as land creatures, we do not really understand the mysteries of amphibious living, at least not the way the Fish Man understands them. We want to swim but not drown.

I am reminded of an amateur video made by a former student, June Xie, at Swarthmore College six or seven years ago. which revealed the strangeness of water to me. June has given me permission to share it:

​June's video reminds me that a healthy spirituality lies in letting go of a current (and comfortably stable) ideas of the self. She admits that she is still have trouble doing that. Here is how she puts it:
​
"Much of living in this world for me is gaining perspective, learning to let go of a current (and comfortably stable) idea of the self. I'm still having a lot of trouble with doing just that; peace, balance within the self is a constant struggle." (June Xie)

Here is what I learn from June's video. If we are too comfortable inside our skin — if we know what we think and where we stand — we miss something deep and wonderful. We lack awareness of the many perspectives on life, and we lack awareness that we are ourselves many lives, moment by moment, each of which is a perspective. We live our lives drop by drop...one drop of experience at a time.

This is what process theology teaches us. It reminds us that our very souls are not self-same substances that endure over time, but rather a series of experiences. We are not things but moments. This moment and then this moment and then this moment. And the truth is that no two moments are alike. Each moment is a coming together — a concrescence — of heaven and earth, and they are always changing. As heaven and earth change so we change. It is all so fluid.

Recall the story of the Zen teacher being asked how the world was created and lifting up one finger. With that single act, the teacher explained, a new world was created, a world that did not exist prior to that moment. Indeed, says June Xie, life is a lot like water. So strange, so fluid, so scary, so different.

Of course we all seek peace of heart and mind. We all want some stability. But isn't peace strange, too? A static peace that remains fixed, devoid of change, would be suffocating.

Yes, in its strangeness, water can be our teacher. Perhaps heaven is a perpetual invitation to let go of false stabilities which are always different, always strange, and so often immensely beautiful. Heaven wants us to fear water for water's sake and for our own sake, too. Only when we delight in strangeness can we know the beautiful. Only when we are not entirely comfortable within our own skins can we know the happiness — the peace — that surpasses all understanding, in ways forever strange. Such is the shape of water.