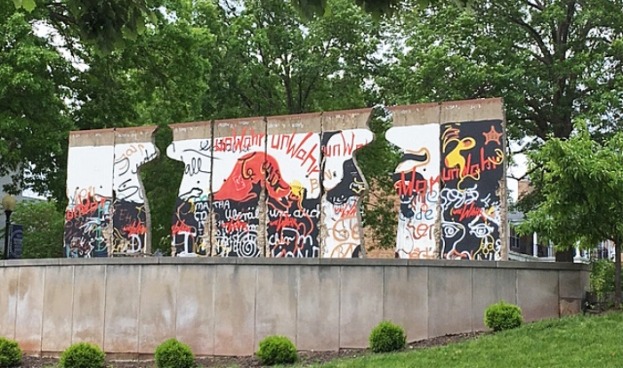 "T" is for Transformation

So you must not be frightened . . . if a sadness rises up before you larger than any you have ever seen; if a restiveness, like light and cloud-shadows, passes over your hands and over all you do. You must think that something is happening with you, that life has not forgotten you, that it holds you in its hand; it will not let you fall.
— Rainer Maria Rilke, Letters to a Young Poet

A Word for Spring

I am standing in a crowd on a cool spring day, listening to the celebrated artist Edwina Sandys tell us the story about a fresh word — a bud of a word, a transforming word: a word made for Spring.

Edwina is the granddaughter of Sir Winston Churchill, that enormously important (and controversial) British leader, who was, above all, a man who knew his way around words. His gift with words helped him buoy up a beleaguered nation in the fight against Nazi Germany.

Edwina is telling us the story of how, as a child, her dear "grandpapa" once returned from a trip to America with a new and exciting word for his grandchildren. That word was "Wow!" This three-letter word that makes your jaw drop and your eyes pop open became the fresh-and-exciting new word in Edwina's household. And when she began to paint, Edwina embodied this word, and when you see her work today and feel its vibrancy, there are no words, save one: Wow! 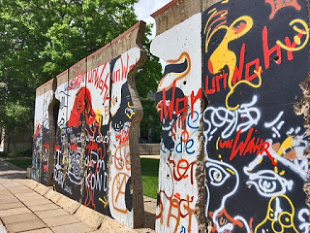 One of her most famous "Wow" pieces is a massive sculpture called Breakthrough. It was
created in 1990 out of eight Berlin Wall panels and installed on the campus of Westminster College in Fulton, Missouri, alongside the National Churchill Museum. The Museum was established in honor of Churchill's prophetic speech The Sinews of Peace, better known as "The Iron Curtain" speech, given at Westminster College in 1946. This is where Edwina Sandys stands now, speaking in front of Breakthrough, a wall that has been transformed from a symbol of oppression to a celebration of freedom.

She tells us how, after the fall of the Berlin Wall, she travelled to Berlin and, thanks to her Churchillian connections, was able to bring back eight 12-foot sections of graffiti-filled wall — at no cost. With them, she created a sculpture out of the remnants of Soviet tyranny. She reassembled the pieces of the wall, but with two giant cut-out figures of a man and a woman. The pieces that were cut out (by the miracle of waterjet technology) did not break apart, so these intact pieces became Breakfree, the counterpart sculpture: two 12-foot figures of "Man and Woman" emerging from symbolic bobbed wire. It was installed on the grounds of the FDR Presidential Library in Hyde Park, New York to honor her grandfather's great friend.

The improbable friendship of these two men — Roosevelt and Churchill — and their ability to face the bleakest of landscapes and not give up, reminds us that the spirit of Wow is always waiting in the wings.

The Many Incarnations of Wow 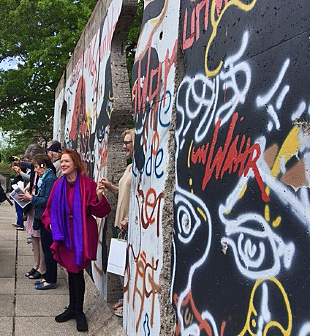 And so, on this sunny day in Fulton, Edwina Sandys offers us many incarnations of Wow. Her entrance, to begin with. As the crowd waits with anticipation in front of Breakthrough, some of us begin to wonder where she is. She is being introduced, but she is not sitting down or even standing nearby. Was she sick? Was she running late? But then we hear an audio recording of her grandfather's famous "Iron Curtain" speech, and in the midst of it, this radiant, red-headed artist of eighty years, emerges through the wall's "Woman" cut-out with a rapturous open-armed greeting, enhanced by a sartorial ensemble of royal blue and red. All that gorgeous color and drama elicits a wave of murmuring wows.

She was not the first to make such a dramatic entrance through one of the cut-out figures of Breakthrough. In 1992, Mikhail Gorbachev traveled from Moscow to Fulton and made his entrance by walking through Breakthrough, declaring that the Cold War was over.

Of course, Gorbachev could not have predicted that his good news was more ephemeral than the world imagined. In her talk, Edwina Sandys speaks of wishing her grandfather could be here today for yet another warning of the dangers to democracy coming from that same quarter of the world. Her message is truthful and uplifting at the same time, offering her artistic interpretation of a flashpoint of transformative history that began in November of 1989 when the Berlin Wall "fell." At the end of her talk, she releases a dozen bright white doves to a cloudless blue sky and a crowd yelling "Wow!"

But more Wow is ahead of us. After releasing the doves, she invites us to come up to the sculpture itself and be a part of her transformative art. She asks us to form in our minds a wish or a dream for the world or for ourselves, and to walk, one-by-one, through the transformed Berlin Wall. On the other side of the opening, she waits with outstretched hand to usher us through — and together we are to offer her fresh word: "Wow!"

My turn comes. I am nervous. While I am supposed to say "Wow!" I hear "Yes!" coming out of my mouth. I suppose I am saying Yes to Wow as I take the out-stretched hand of the artist and walk over the threshold. The sun is shining, the air is cool, the doves still enliven the sky like winged angels. I take a breath and offer a prayer for our distressed planet.

A Theology of Wow

I can only wonder how, in November of 1989, those who had been oppressed by this wall must have felt when they walked free. I imagine that despair fell apart in the wind and that there was a fluttering of Wows that filled the sky like doves.

On this day, so many years later, as I step over the threshold of Breakthrough, I feel a sudden breaking up of the layers of despair I carry over this world and its walls. It occurs to me anew that the spiritual life opens us up to something more than what we can see in front of us. It is like a religious ritual, something Franciscan author Richard Rohr describes as "sacramental theology," that is, "where the visible and tactile are the primary doorway to the invisible." 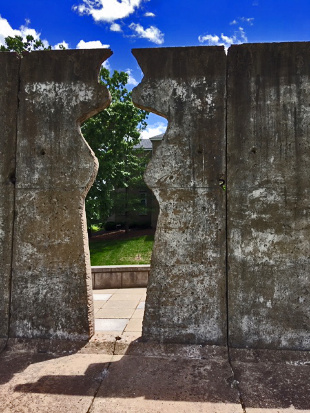 Stepping through the wall feels like walking through a door to some new world — a world of fresh words and invisible powers of tenderness and goodness that are part of the air itself. It is a kind of post-liminal experience, that is, when one has crossed a threshold and into a transformed state of being. I am also keenly aware of the spiritual truth that we must walk not around our pain and suffering, but through it, just as I now walk through this once-depressing wall. Feelings are to be walked through, felt, and affirmed if they are to find transformation.

Weekly, daily, moment-by-moment, we are offered ongoing thresholds of transformation, but we often fail to accept the invitation. We are afraid. It is a matter of embracing the invisible, widening our perspective, and believing in the presence of a fundamental Goodness that flows through the world with relentless love. Like an underground stream of fresh water, we can't always see it, but we can tap into it. And when we do, freshness washes through us eagerly, lovingly, joyfully. Our response to such grace must, indeed, be something like "Wow."

In my own faith, we celebrate such Wow moments at Easter, but we can celebrate them every day if we tap into the flow of divine possibilities. After all, such transformative moments are initiated by a Spirit who, through a thousand generous lures, reaches out to us in our despair, takes our hand, and ushers us over the threshold to freedom. Such could be described as a Theology of Wow.

If you are like me, you sometimes feel despair over this world, a dark heaviness of spirit, reminding me of Churchill's own "Black Dog," his name for his bouts of depression that would suddenly rise up — big and dark and threatening. The Black Dog followed him until the end of his life. It was through painting that he found release and hope, and it was through his granddaughter's transforming art that I was able to tame my own shadow of the Black Dog.

Sometimes the world seems irredeemably deaf to the sounds of crumbling icebergs and crying children fleeing from violence. Such despair over this world is like the sadness Rilke expresses, the kind that "rises up before you larger than any you have ever seen."

But then you fall upon a moment of tragic beauty when the darkness is transformed. A break in the wall of despair invites you to enter, and the detritus of fear becomes the very catalyst for freedom. You suddenly remember human history and how "breakthroughs" happen against all odds, how goodness is always there, how transformation is always possible. Always.

I am told that shortly before my mother's death, as she lay in her hospital bed, she carried on a conversation with her own dead mother, inviting her to "come in," as if her mother was waiting at an invisible threshold — waiting with outstretched hand to usher her daughter into a transformed existence. I imagine my mother had something definite to say about this, and that it was something akin to "Wow!"

Oh, yes, there is a new word, a fresh word, a word from far off. Can you hear it? Maybe only the young and the artists hear it — like Edwina Sandys or Malala Yousufzai and Greta Thunberg. It is a word that suddenly erupts from your vocal cords when you remember that there is more. There is more than what we see now, more than our present despair, more than souls enslaved by fear and ignorance. There is sunshine and there is blue sky and there are white doves and invisible bursts of love, and yes, there are even visionary human beings of flesh and blood who will take our hands and help us breakthrough into a new world of freedom.

All we have to do is step though and say, "Wow!"