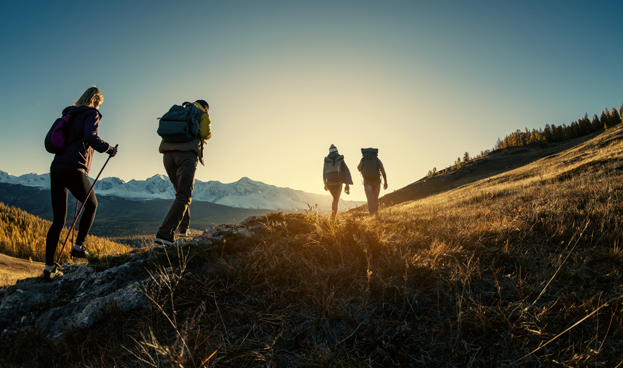 "Q" is for Questing

"We are more alive when we are actively involved with questing and questions. Keep moving. Keep crossing inner and outer borders. Keep asking."
— Frederic and Mary Ann Brussat, Spiritual Literacy

Over the years, Q, that once innocent letter of the alphabet, has been cruelly besmirched. Back in the 1980s, Star Trek began featuring a dastardly extra-dimensional being, Q, who could manipulate reality on a whim. Recently, Q has been co-opted by an unsavory conspiracy-theory group, QAnon, whose greatest accomplishment is illustrating the downfall of rational thinking in the U.S. To see Q continually fall to the dark side is disturbing beyond words, and so I feel the urgent need to restore Q's good name.

In the Alphabet for Spiritual Literacy, Q stands for "Questing." Unlike its evil twin, this Q includes the discipline of thoughtful, critical thinking. That is, it asks questions; it seeks truth. Questing after truth, beauty, justice, and other noble ideals may, in fact, be the antidote to delusional conspiracies as well a guard against all-powerful manipulators.

Questing's sister-word "question," comes from the Latin "quaerere" (to seek) and shares the same root with "quest." Q is the student who keeps raising her hand in class to ask more questions. Q is the scientist searching for empirical evidence. Q is the philosopher in search of not only valid arguments but sound arguments, that is, with premises that correspond to reality. Q is the detective who, like Hercule Poirot, doggedly extracts truth from lies with question after question until the murderer finally breaks down and confesses.

Questioning not only opens the mind to truth and critical thinking, but also fuels the spiritual adventure. "Questions," write Mary Ann and Frederic Brussat, "are powerful allies on a spiritual journey. They stretch our mind, body, and soul." Questing lifts us out of the small, neat, safe, box of "going along" with the crowd and sets us down on an open path with twists, turns, and a dozen offshoots of possibilities for spiritual adventure.

Questing, a gerund, implies continuous movement. It calls for our willingness to let go of a perceived state of "being" for a new venture of "becoming." This can be messy. So put on you rubber boots and start where you are. Take along a water bottle and a Power Bar, too, because this journey may prove long and arduous. You will hike up and down mountains and slide into some dark valleys; you will "cross inner and outer borders" that you had never dreamed of crossing! Eventually, you will find yourself on a path that Meister Eckhart says, is "beautiful and pleasant and joyful and familiar."

Questing, for the spiritual pilgrim, is on ongoing journey to the end of life. But there are accentuated moments in life that seem to take on a sense of The Big Quest, often accompanied by a spiritual or moral crisis. As a seminary student, I quested for a God I could worship and love in the face of the daunting "problem of evil and suffering." That is, the traditional "God of the philosophers" was supposed to be all-powerful and all-good at the same time. None of the classic "theodices" meant to get God off the hook made me like God one iota more. Unsatisfied and agnostic, I found myself in a spiritual crisis. So, I entered a philosophy graduate program and continued my quest. Now, the Big Questions were met and attacked head-on: questions like, "How could a God who could stop the Holocaust, choose not to?" Or, as I asked my professor, "What kind of immoral monster-god is that?" Philosophy gave me permission to ask such impertinent questions while giving me the critical thinking skills to work with them. This was no idle pastime. The stakes were high. I felt called to the ministry, but who would want a minister who hates God?

My quest for a God-I-could-believe-in led me down pockmarked roads and dispiriting dead ends, but I carried the light of questing inside me. One day, my favorite professor gave me a copy of a journal article by the process philosopher Charles Hartshorne. This led to more books on process philosophy and theology. A new path opened up for me and it was, indeed, beautiful and pleasant and joyful and familiar. I fell in love with God again, but this time, it wasn't the old "God of the Philosophers," but rather the God who quests for beauty and whose very definition is love. This God bears no resemblance to a manipulative tyrant, but rather a "great companion — the fellow sufferer, who understands" (Alfred North Whitehead).

Questing still keeps me moving, asking impertinent questions, and crossing "inner and outer borders." These days I quest for justice; I quest for hope in restoring civility, rationality, and a solid sense of democracy; most of all, I quest for a world that embraces the reality of science in the face of climate change and COVID-19. The God I discovered in my first Big Quest reminds me that I cannot sit idly by and hope for Divine intervention in the face of catastrophic climate fires and floods. God is already here, in us, in the earth, and in all the creatures of the world who carry their own desperate quests to survive the consequences of human folly.

And so, may we help Q shake off its maligned reputation and get a fresh start as we seek a new path for our country and our planet — a path not filled with hate and conspiracies and tyrants and division, but one that is beautiful and pleasant and joyful and familiar. We just need to keep moving. Keep crossing inner and outer borders. Keep asking.