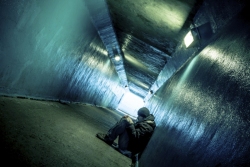 Early in 2014, Nicolas Kristof declared in his New York Times column that mental health was one of the most systematically neglected issues in the United States, given the fact the National Institutes of Health says a quarter of American adults suffer from a diagnosable mental disorder – depression, anxiety disorders, anorexia, post-traumatic stress disorder, and others. All across the country are relatives and loved ones struggle with difficult psychiatric disorders.


Kristof points out that the great majority of people who are mentally ill are not violent – except to themselves. Every year 38,000 Americans commit suicide and 90 percent of them are said to suffer from mental illness; comedian and actor Robin Williams was one of them. Treatments sometimes work as in the case of John Nash, the Princeton University math genius whose life and struggle with delusions was portrayed in the movie A Beautiful Mind. Respect for what he was going through is a major element in this path-breaking drama.


In his second article, Kristof looks at the criminalization of mental illness. According to a 2006 Justice Department study, more than half of the prisoners in the U.S. have a mental health problem. Among female inmates, three-quarters have a mental disorder. With the closing of so many mental hospitals, prisons now take in schizophrenic, bipolar, depressive, and psychotic individuals brought to them by local police departments. In 1955, there was one bed in a psychiatric ward for every 300 Americans; in 2010, there was one for every 3,000 Americans. Some people now commit a crime just so they can get medication. Sadly, Kristof reports, mentally ill inmates are often preyed upon while incarcerated.


As many experts in the field have noted, now is the time for public health officials to face the mental health problem. We need more practitioners in the field and new institutions to look after mentally ill people. We are grateful to Kristof for drawing attention to this complicated issue!