Radical Amazement: Nature and the Spiritual Life of Children 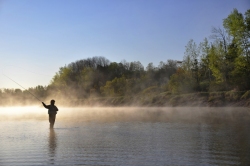 In an essay written on his blog, Richard Louv writes about his desire to share with his children the glory of witnessing a sunrise on a mountain. He feels that this experience can be "a window to something larger." But Louv's boys stay asleep in their beds and do not get up in time.


A few days later, a group of friends gather at his house to talk about religion and children. Some find church good for their kids, others don't, and a few feel guilty that they don't provide their children with a religious perspective on life.


At another gathering, this time with a group of religious leaders including a priest, a minister, an imam and a rabbi, Louv is pleased to hear Rabbi Martin Levin say that to be spiritual is to be radically amazed:

"To quote the words of Professor Abraham Joshua Heschel, a great teacher of our age, our goal should be to live life in radical amazement. Heschel would encourage his students to get up early in the morning and look at the world in a way that takes nothing for granted. Everything is phenomenal; everything is incredible; never treat life casually. To be spiritual is to be amazed."

Viewing fishing as his special window to the spirit, Louv takes his sons with him on an outing and one of them seems to get it. Everything calms down around the boy and Louv notes: "Sometimes the rhythm of the rod is like a chant or the swinging of incense." There are many windows to the Spirit and parents should share their own radical amazement as much as possible.

Next Post: The Art of Slowing Down in a Museum