Nothing Left Over A Plain and Simple Life

"Not introducing unwanted possessions into your home and/or surrendering those that are not being used creates not just physical space but also psychological space. People often comment on how empty my apartment is, and I think this is because it feels free and clear. There is very little in it (apart from the phone and the microwave) that is just gathering dust.

"One major thing I don't bring into the house is the newspaper. Six weeks after I started work at Knopf, there was a big piece in The New York Times about the circumstances of Bob Gottlieb's hiring. I was shocked not by what was included in the article but what was not. The major facts had been left out; therefore, the whole report was skewed and, it seemed, malicious. This was an event that I knew about. Thereafter, I hesitated to read accounts in the newspaper of things of which I had no prior knowledge because I wouldn't know what to add in to make the picture accurate. I stopped reading the Times, and people continue to be amazed by this. As someone said to me the other day, 'Not buying The New York Times represents a level of simple living far beyond anything I've considered.' It's not that I am completely uninformed; I do listen to the news on the radio in the morning and watch it on television at night. And there are always friends who press upon me clippings that they have saved. But can you imagine the time, money, and energy I have saved over the last thirty-two years?

"When I leave town for any reason, I have got into the habit of surrendering my apartment to a friend or an acquaintance. I don't go out and look for anyone. What happens is that a week or so before I am leaving, I hear from someone who is hoping to find accommodation for a short period. Sometimes it is a person I know well, but often it is someone I know only by reputation. I don't charge rent. I am just happy that the space is being occupied and enjoyed. And I like the idea of someone being there in my absence to deal with any emergencies that might arise (but don't). In a way, it is odd to have guests I can't entertain personally, but I believe that they appreciate what my little home has to offer, and they will return to share it with me sometime in the future. I am also always touched by the gifts I find on my return: a bowl of tall white narcissus, a loaf of crusty bread, a new brush for the toilet — whatever the visitor perceives is my need." 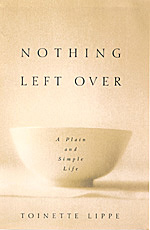