Spiritually Incorrect Finding God in All the Wrong Places

Dan Wakefield interviews Ram Dass about being a guru.

"Does he think of himself as a guru?

" 'No. People have enticed me. It's too absurd. They offer a throne and robes. I tell them, 'My guide was an old Indian with his blanket falling off.' Besides, why would you want to be a guru? I don't want to be in the hotel business.

" 'There are some people from India coming over tonight, and they'll bring me candy and flowers, they'll touch my feet, have their children touch my feet. I'm their projection; I'm fodder for them, a pawn in their game. It's a way to contribute to them. To serve them. I don't take their projection of me any more seriously than if someone says 'Ram Dass, you're full of shit.' I stop, look to see if I am full of shit, and if I am, I do something about it. If I'm not, I forget about it.'

"I asked Ram Dass his plans for the future.

" 'My guru said, 'No monasteries or ashrams for you, Ram Dass. You don't stay put, you keep moving.' I'm part of a sect that believes water and yogis turn bad by staying in one place. It's a lineage of service. It's karma yoga, the path of service to liberation.

" 'I have no students. It really wouldn't be appropriate. I'm more like an elementary school teacher. I don't give graduate course work. What I do is great karma. Be Here Now touched a lot of people's lives. The people I work with, their love and appreciation comes from such a sweet, deep place. It's not like a fan club; it's genuine.'

"Ram Dass's many fans were distressed to learn that three years after that conference, while working on his book about conscious aging at his home in San Anselmo, California, he suffered a major stroke. His vision and hearing were impaired, and he needed to use a wheelchair, but he worked hard at recovery, and finished his book — with the wry and appropriate title Still here. Six years after the stoke, though still using a wheelchair, he was carrying on his work, writing, traveling, speaking — being here, still, now." 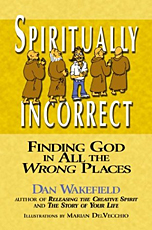