"Now, it is also quite clear that different religious traditions – in spite of having different philosophies and viewpoints — all have a spiritual potential to help humanity by promoting human happiness and satisfaction. As a matter of fact, given the vast array of humanity — of so many different kinds of people, of so many people with differing mental dispositions — we need a variety of religious traditions and so it is far better to have this variety.

"Religions are like medicine in that the important thing is to cure human suffering. In the practice of medicine, it is not a question of how expensive the medicine is; what is important is to cure the illness in a particular patient. Similarly, you see, there is a variety of religions with their different philosophies and traditions. The aim or purpose of each religion is to cure the pains and unhappiness of the human mind. Here too, it is not a question of which religion is superior as such. The question is, which will better cure particular person.

"As a Buddhist monk, a Buddhist practitioner, from my own Buddhist tradition I have learned the importance of this suitability of religion according to an individual's mental disposition. For example, in what we call Mahayana Buddhism, the bodhisattvayana, there are different views about reality. Each school's interpretation is based on Shakyamuni Buddha's own words as recorded in certain sutras.

"So it may seem that the one teacher, Shakyamuni Buddha, himself creates contradictions for his own followers. This is certainly not due to his own confusion concerning his own viewpoint. Certainly not. We believe that Shakyamuni Buddha is enlightened, in full realization of the truth. Therefore, we must conclude that he deliberately taught different philosophies according to the different mental dispositions of his followers. So from just our own tradition, we can learn about how important a person's mental disposition is for determining which religious tradition is best for him or her. It is not a question of determining that one interpretation of reality is true, and that since another is false you therefore should not follow this first interpretation. You cannot say that. Even Buddha could into say that.

"Therefore, from this experience it becomes very clear that for certain people a Christian method is much more effective than others. Muslims find their own approach to better suit their lives. So we cannot say, 'this religion is good, that religion is not good.' That we cannot say.

"On an individual basis, however, we can say that a particular religion is best for us. For example, the Buddhist way is best for me. There is no doubt! But this does not mean that Buddhism is best for everyone. And even within Buddhism, Madhyamika philosophy is best for me. But I cannot say that this view is best for all Buddhists. We cannot say that! So it is on this basis that it is extremely important to appreciate all the different religious traditions of the world, and particularly the major world religions. I think that there are sufficient reasons to respect and appreciate all the major religious traditions.

"It seems to me that we can divide humanity into three groups. One group — which is the majority — has no interest in religion. These persons are simply concerned about daily life — especially about money. Then there is another group which has a very sincere religious faith and practice some type of religion. Finally the third group is intentionally very much opposed to any religious ideas. Looking at these three groups, we see that they are all the same in one regard: they all seek happiness. Here, there is no difference.

"But differences do arise concerning how to achieve happiness. The first group believes that money alone can bring happiness. The second believes that it is through religious spirituality that we can attain happiness. And the third group believes not only that we benefit from money, but also that religious ideas are actually very poisonous to human happiness. They believe that religion is used by the ruling class of older societies as an instrument to exploit the masses. During much of this century, there has been competition between this antireligious group and religions. Recently, however, it seems that the value of religion for human happiness is becoming clearer to more and more people.

"In this regard, I always tell audiences that interfaith dialogue can improve closer understanding between different religious traditions. One type of dialogue involves scholars meeting in a more academic way to clarify the differences and similarities between their traditions. This type of dialogue provides a valuable way to help people understand and appreciate each other's religions and build bridges between different religious communities.

"A third kind of dialogue is a meeting like the 'Day of Prayer for Peace' in Assisi in 1986. While there, religious leaders came together and exchanged a few nice words. That was also very helpful. In the eyes of millions of people, it was very, very helpful. That kind of event eventually creates a more positive grass-roots atmosphere wherein religious leaders can then discuss various crucial matters.

"A fourth type of dialogue involves a meeting between genuine practitioners of different religious traditions. This is to me very, very important; very, very helpful. An example was my meeting with the late Thomas Merton. Also at the Gethsemani Encounter, there was a long discussion about how to face anger. That part of the discussion I really felt was a clear example of spiritual dialogue. The Christian practitioners and the Buddhist practitioners both realize that anger is something negative. We both have to work on the problem of anger, even if our methods are different. Christians have a faith in God, and through that they try to work on the problem. Buddhists have another way. But it has the same objective; the same purpose.

"I also think that besides our dialogues we should have a kind of constructive competition. Buddhists should implement what we believe in daily life, and our Christian brothers and sisters should also implement their teachings in daily life. Son on the field, I think, we should have some competition. Since each side would like to be better practitioners, there is no harm in such competition — it is really constructive. On the other hand, to say that my practice is better than another's, I do not think that is of much use. So that is my basic belief, my basic feeling, about the encounter of our religious traditions." 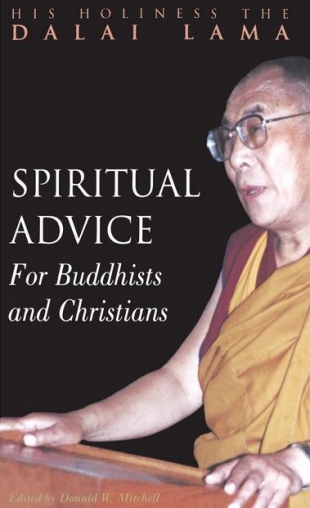