No Contest The Case Against Competition

By Alfie Kohn
Alfie Kohn on the consequences of winning.

"The trouble with a hypercompetitive culture like ours is that we not only leave the mechanism intact but we create a network of reinforcement for winning at any cost. Cheating and the like can be said to be overdetermined — called forth by both the intrinsic structure of competition and the societal attitude toward it. . . .

"The pressure we feel to be number one creates a vicious circle as we expect others to play dirty and feel justified in breaking the rules ourselves — if not obligated to do so. If I play it straight, the next guy is just going to take advantage of me. To complain, as the lawbreaker often does, that honesty does not pay may be self-serving, but it is largely correct in a competitive society.

"When we dismiss someone as a 'loser' — one of the most scathing epithets — we are underscoring the importance of winning. It is not seen as important that we win with restraint or in accordance with ethical principles — just that we win. An athlete who plays dirty develops a reputation as someone to be reckoned with, someone impressive and fearsome; he is 'bad' or 'tough' in the admiring sense that children use these words. The concrete advantages of such a style also are clear: What's a 15-yard penalty if you can put the other team's receiver out of the game? No one gets kept on the team for being a good sport. The more substantial penalties are handed out for losing. . . .

"Our approval of winning at all costs is the secondary inducement to cheat; the primary inducement is the nature of competition itself. It is true that contests without cheating or violence occur if we successfully introduce considerations that are external to the impetus to win. Such contests seem unobjectionable, however, precisely because the element of competition has been diluted. To point to a morally exemplary lawsuit or an examination where the honors system is respected is not to refute the basic point here. The less competitive a given activity, the less likelihood, all things being equal, of 'abuses.' This is consistent with my previous arguments: the higher the concentration of competition in any interaction, the less likely it is to be enjoyable and the more likely it is to be destructive to our self-esteem, our relationships, our standards of fairness." 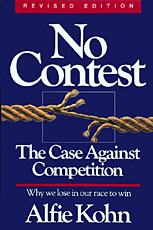