By Gustavo Gutierrez
An exploration of the challenges and the joys of those who are poor.

"Beyond any possible doubt, the life of the poor is one of hunger and exploitation, inadequate health care and lack of suitable housing, difficulty in obtaining an education, inadequate wages and unemployment, struggles for their rights, and repression. But that is not all. Being poor is also a way of feeling, knowing, reasoning, making friends, loving, believing, suffering, celebrating, and praying. The poor constitute a world of their own. Commitment to the poor means entering, and in some cases remaining in, that universe with a much clearer awareness; it means being one of its inhabitants, looking upon it as a place of residence and not simply of work. It does not mean going into that world by the hour to bear witness to the gospel, but rather emerging from within it each morning in order to proclaim the good news to every human being.

"Contrary to what a certain romantic notion would hold, the world of the poor is not made up simply of victims, of solidarity and the struggle for human rights. The universe of the poor is inhabited by flesh-and -blood human beings, pervaded with the forces of life and death, of grace and sin. In that world we find indifference to others, individualism, abandoned children, people abusing people, pettiness, hearts closed to the action of the Lord. Insofar as the poor are part of human history, they are not free of the motivations found in the two cities of which St. Augustine spoke: love of God and love of self.

"But it is also true--and this adds to the complexity — that the specific form these characteristics take bears the mark of an intolerable poverty, of the struggle for basic human survival, of boundary situations. This it is often difficult to pronounce definitive judgment with categories belonging to other contexts. This is one more reason to move in this world with the greatest respect." 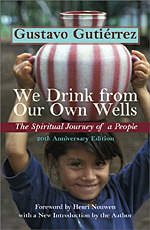