Buddhism Is Not What You Think Finding Freedom Beyond Beliefs

By Steve Hagen
Steve Hagen on the importance of attending to the present moment by not trying to change or control things.

"There's a story of a Zen teacher named Kuei-shan, from ninth-century China, and his student, Yang-shan. Yang-shan came to Kuei-shan and asked, 'When the ten thousand things come up to you, what should you do?'

"Kuei-shan said, 'Green is not yellow; long is not short. Each thing manages its own; why should I interfere?'

"What we don't recognize is that the very things we try to arrange are imaginary, frozen, mentally packaged up — while Reality is thoroughgoing flux and flow.

"We carry on as though our lives can be properly arranged for our happiness if only we can somehow manage the art of arranging. Once we attain this mastery, we can get what we want. We can be satisfied. We can make our lives work. We can make the rest of the world work.

"Yet we can never manage to make the world or our life into what we want it to be — at least not for long. Things change, and so we may try something else. We start to think again about what would improve our lot, and the whole delusion cycles through once more.

"If we scrutinize it carefully, we'll see dissatisfaction woven right into the heart of this approach to life. And we might also notice that our situation is perfectly fine before we step in and try to improve it.

"But aren't we better off today in all kinds of ways than we were in times past?

"In trying to prove or decide that we're better off — or that we're not better off — we're yet again grasping for an explanation or an answer. But whatever we take hold of, it's dubious from the start.

"When we say, 'we're better off,' we're imagining that somehow the story is over and we've reached a point of stasis. But such as point never happens in real life. Indeed, part of what characterizes fairy tales is that they end at a momentarily happy point, or else they pretend that things will stay that way eternally ('and they lived happily ever after').

"But in Reality the story is never over. There's just ongoing flux and flow. So how can we say we're better off? It's an absurd thought. No one knows how the story is going to unfold. No matter what we would point to, it can always be countered. It never stops.

"Nevertheless, we act and plan as though there are actual endings. This is because, in our delusion, we ignore thoroughgoing change, believing that things actually endure and persist, even if only for a moment. It's all an illusion, but we don't see it for what it is.

"There's another story of Master Kuei-shan, in which he says to his monks, 'Today the weather is cold — as cold as it was a year ago, And next year we'' have the same cold weather.' Turning to Yang-shan, he said, 'Tell me, what are the days of the year worth repeating?'

"Yang-shan, who was a senior monk, made a gesture of respect but said nothing.

"Kuei-shan said, "I knew you couldn't say anything,' Then he looked at Hsiang-yen, one of his junior monks, and said, 'What about you?'

" 'I think I can say something about that,' Hsiang-yen began.

" 'I'm glad that the senior monk could not answer me,' interrupted Kuei-shan.

"What can we truly say about ongoing, cyclical, ever-changing existence? The moment we try to say something about it — the moment we try to put it into a frozen, conceptual form — we step away from the actual Reality we find ourselves in.

"The awakened only want to be awake. They don't want to be deceived about what is going on. This is enough." 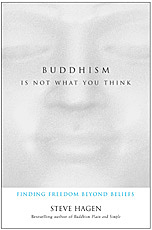