A Passion for Seeing On Being An Image Maker, An Anthology of Writings, Drawings & Sculpture, 1959 - 2003

"To be aware of still breathing (until it stops), of the earth (as long as it lasts), of feeling hungry and delighted with a fresh egg, a piece of still-warm bread, is to be still part of humanity.

"Contempt of and animosity toward 'the others' is so ingrained, that we have the greatest difficulty taking their view of life seriously. Indoctrination is so persuasive that we can't help assuming that 'they' too are programmed, be it incorrectly.

"As long as the non-Christian religions are considered as mere antipasto for the Last Supper, all ecumenism is fraudulent.

"When Hui Hai was asked: 'Are Buddhism, Taoism and Confucianism three different religions or one and the same?' he answered:
'For men of the highest capacity they are one. For the mediocre they are three. For those below this level they are not only three, but irreconcilable . . . Whether a man reaches liberation, however, depends on himself, not on differences in doctrine.'

"Could it be that the swift alteration, each day, of overwhelming beauty and tenderness with unspeakable cruelty, stupidity, horror and evil is the only spiritual discipline we need — provided all the senses are kept open, no moodlifters taken — to awaken to the great Guru, the Mater at our core? Yes!” 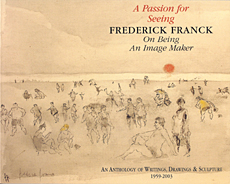