"[Francis de Sales wrote that] 'those who have written about devotion have nearly all had in mind the instruction of persons completely separated from life in the world. At least, they have taught a kind of devotion leading to such a complete separation. My purpose is to instruct people living in towns, the married, and those at princely courts. These are obliged by their state of life to lead an ordinary life to all outward appearances. Very often such persons do not want even to think of venturing on the devout life, finding an excuse in the false claim that it is impossible.

" 'These people are of the opinion no one caught up in the rush of living in the world should reach out for the palm of Christian devotion. But I want to make them understand that, just as the pearl oysters live in the sea without letting in a single drop of salt water, . . . and . . . a certain insect can fly about in the fire without burning its wings, so anyone with courage and determination can live in the world without being tainted by its spirit, finding springs of the fresh water of devotion in the world's salty waves and able to fly amid the flames of the temptations of the world without losing the wings of the holy desires of a devout life.'

"This lay adaptation of the spiritual heritage in no way vitiated the core of the Christian spiritual life; the cultivation of a life transfigured by the Spirit of Christ remained the goal. However, this transformation was not to be accomplished primarily through external practices but through a deep interiority. The heart of the person was to be opened to the living, transforming divine presence. She or he was to 'Live Jesus!' Always, this opening was a matter of Love's movements. To convey this truth Francis employed the image of engraving.

" 'In brief, men in love with a human and natural love have their thoughts turned, almost always, towards the person they love. Their heart is full of affection for her. They always speak her praises. In her absence, they lose no opportunity to express their love through letters. They carve her name on the bark of every tree they find. Similarly, those who love God cannot stop thinking of Him. They would engrave, if it were possible, the holy and sacred name of Jesus on the breast of every person in the world.'

"Francis' ability to capture profound truths of the spiritual life in language with which his readers could identify was striking. His effort was directed not simply towards popularisation but towards expressing, in attractive and attracting ways, the truth that all love is from and ultimately for God. In the Salesian world, one does not have two hearts, one that loves God and one that loves others, but one heart created by and for God and the full realisation of God's designs throughout creation. All loves, if rightly ordered, are seen as capable of leading a person deeper into the mystery of divine love. For love and its motions are both means and end. In the cultivation of affectionate God-conscious relationships — marriage and family, community life, friendships — the living presence of Love is enfleshed in the world. Vive Jesus! Live Jesus!" 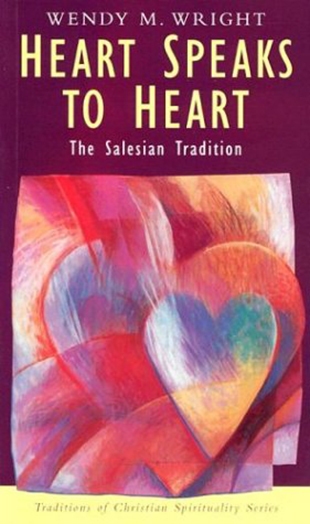