"It is this change in consciousness that encourages me. Granted, racial hatred and sex discrimination are still with us, war and violence still poison our culture, we have a large underclass of poor, desperate people, and there is a hard core of the population content with the way things are, afraid of change.

"But if we see only that, we have lost historical perspective, and then it is as if we were born yesterday and we know only the depressing stories in this morning's newspapers, this evening's television reports.

"Consider the remarkable transformation, in just a few decades, in people's consciousness of racism, in the bold presence of women demanding their rightful place, in a growing public awareness that gays are not curiosities but sensate human beings, in the long-term growing skepticism about military intervention despite brief surges of military madness.

"It is that long-term change that I think we must see if we are not to lose hope. Pessimism becomes a self-fulfilling prophecy; it reproduces itself by crippling our willingness to act.

"There is a tendency to think that what we see in the present moment will continue. We forget how often in this century we have been astonished by the sudden crumbling of institutions, by extraordinary changes in people's thoughts, by unexpected eruptions of rebellion against tyrannies, by the quick collapse of systems of power that seemed invincible.

"Political power, however formidable, is more fragile than we think. (Note how nervous are those who hold it.)

"Ordinary people can be intimidated for a time, can be fooled for a time, but they have a down-deep common sense, and sooner or later they find a way to challenge the power that oppresses them.

"People are not naturally violent or cruel or greedy, although they can be made so. Human beings everywhere want the same things: They are moved by the sight of abandoned children, homeless families, the casualties of war; they long for peace, for friendship and affection across lines of race and nationality.

"One semester, when I was teaching, I learned that there were several classical musicians signed up for my course. For the last class of the semester I stood aside while they sat in chairs up front and played a Mozart quartet. Not a customary finale to a class in political theory, but I wanted the class to understand that politics is pointless if it does nothing to enhance the beauty of our lives. Political discussion can sour you. We needed some music.

"Revolutionary change does not come as one cataclysmic moment (beware of such moments!) but as an endless succession of surprises, moving zigzag toward a more decent society.

"We don't have to engage in grand, heroic actions to participate in the process of change. Small acts, when multiplied by millions of people, can transform the world.

"To be hopeful in bad times is not just foolishly romantic. It is based on the fact that human history is a history not only of cruelty, but also of compassion, sacrifice, courage, kindness. What we choose to emphasize in this complex history will determine our lives. If we see only the worst, it destroys our capacity to do something. If we remember those times and places — and there are so many — where people have behaved magnificently, this gives us the energy to act, and at least the possibility of sending this spinning top of a world in a different direction. And if we do act, in however small a way, we don't have to wait for some grand utopian future. The future is an infinite succession of presents, and to live now as we think human beings should live, in defiance of all that is bad around us, is itself a marvelous victory." 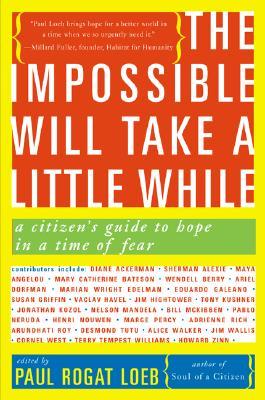