Fumbling A Pilgrimage Tale of Love, Grief, and Spiritual Renewal on the Camino de Santiago

By Kerry Egan
Kerry Egan on hanging onto whatever you can when it comes to faith.

"A friend of mine once said, as he held up a tangerine, that the only thing that allowed him to believe in God when he had been diagnosed with multiple sclerosis was fruit. It was the most perfect thing in the world, he said, beautiful and delicious, and healthy for you at the same time it effectively fulfilled its purpose, to help plants reproduce. Everything worked together perfectly, all those different animals and plants helping each other. And it came in its own perfect packaging. Not even the most brilliant human mind could think up such a thing, he thought. He could not give up all belief in a good and wise and creative God because he had fruit. And he had never eaten those raspberries.

"I think sometimes you have to hang on to whatever you can when it comes to faith. And if that's fruit, so be it. There are times in at least some people's lives — maybe many people — when belief in any compassionate or kind or even benign force in the universe is almost impossible. But if you can just hold on to something — or perhaps more likely, if something holds on to you — it can be the beginning of a new way of seeing, a new life." 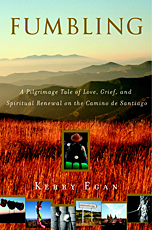