The Wet Engine Exploring the Mad Wild Miracle of the Heart

By Brian Doyle
Brian Doyle on how touching his son affirms grace.

"As I write these lines I look up and see Liam sprinting by, roaring, covered with mud and jelly. There's something about that boy, as my wife says, something calm, a grace mature far beyond his years; and while he can be the biggest rockhead ever born, and he runs like an old truck missing a wheel, and I have cleaned up far too many wedges of toast far-flung in petulance, I too have noticed an eerie grace in him, as if he is able to draw on a reserve tank of the stuff that most people can't summon. He calms people, I notice. He doesn't start fights, and although he's perfectly willing to poke his brother in the eye or pull his sister's hair when provoked, generally he breaks up fights, he defuses tension. Part of his charm is natural to any child but he seems to have a second gear that he brings to bear when needed; a grace suitable to need.

"When he was born, with his missing chamber, and we thought he might die any day, I loved him inarticulately, and raged at his Maker for making a broken boy, and many a night I sat rocking with him and thought about grace; what grace was this, to build a big pink boy to drive him through boyhood? A cruel gift of life and death at once. Now he is repaired for a while, a few years, a boyhood, before he needs a man's heart, and I have learned to shut my mouth and learn about grace: the deft grace of the doctors who edited him, the open grace of the thousand people who prayed for him in churches and temples and stupas and chapels and novenas, the grace with which he carries the body God gave him and Dave edited and surgeons carved in a way dreamed up by le docteur Francis Fontan.

"I rub the peachfuzzcrewcutted head of my boy when he wanders past me in the kitchen, and I hold him in my arms when we sit on the couch in the dark marveling at ogres and orcs, and I rub his back at night, cupping his round face in my hand, whispering Gaelic in his ears, holding his hand when we cross streets, rubbing his legs and feet when he cries at night from growing pains, feeling his bicep when he flexes to show me he is more powerful than his many heroes, because there is always a jolt of joy in the touch, even when I am furious at him; because when I touch him there he is, and somehow my body never forgets the fear of the loss of his body. There's some kind of electric magnetic thing at play — an electric love in his heart and mine.

" 'Without touch, God is a monologue, an idea, a philosophy,' wrote the late great American mystic Andre Dubus. 'He must touch and be touched . . . in the instant of the touch there is no place for thinking, for talking; the silent touch affirms all that, and goes deeper: it affirms the mysteries of love and mortality.' 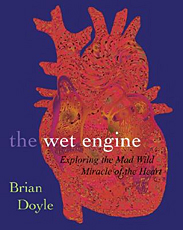