"Stephen Laurent loved to tell language stories, tales of how new words came to be. One was of how the Abenakis came up with the word for the clock. When the French arrived among our ancestors (and also — Bonjour, mademoiselle! — became some of our ancestors) they brought clocks with them. The Abenakis had never seen such things before, and clearly they were of great importance to the French, for they placed them centrally in all their homes and constantly referred to them. So the Abenakis decided they needed to find a word of the clock that adequately described it. They began to observe how the French used their clocks and saw that the clocks told them when they should sleep and wake up. This was strange, since Abenakis slept when it was dark and woke when the light of the sun returned. Clocks also told the French when they should eat their meals. Equally strange, for Abenakis ate when they were hungry. Clocks even told the French when they should pray. This was the strangest thing of all, for Abenakis prayed whenever they wished to express their thanks to Ktsi Nwaskw, the Great Mystery, and that was often at any time of the day.

"So the word papizookwazik was created to echo the ticking sound of those first clocks. Onomatopoeia is common in Abenaki, where many things in the natural world know their own names so well that we have simply to repeat what they say to name them. Such as Mzah-kas, the crow, literally the one covered with charcoal — yet another story. Or Kah-ahk, the seagull. Papizookwazik is good in that same echoing way. But it is even better in its literal meaning: 'that which makes much noise but does nothing useful.'

"When I walk into the woods here at the end of Ridge Road, I remove my watch. So for a time, the time of this story, I ask you to do the same. Take off your watch. Step back — or forward — into story time. And remember the simple native truth that even though every story has a beginning, it doesn't have to travel in a straight line." 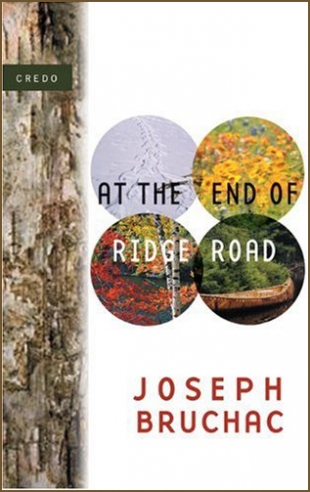