By Kurt Vonnegut, Jr.
Kurt Vonnegut's character Walter Starbuck on the the meaning of the Sermon on the Mount.

"The answer I gave him was not original. Nothing about me has ever been original. I repeated what my one-time hero, Kenneth Whistler, had said in reply to the same general sort of question long, long ago. Whistler had been a witness at a trial of strikers accused of violence. The judge had become curious about him, had asked him why such a well-educated man from such a good family would so immerse himself in the working class.

"My stolen answer to Nixon was this: 'Why? The Sermon on the Mount, sir.' " 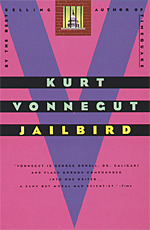