"Postmodern secular culture tends to underemphasize responsibility, thereby generating a strange contradiction. On the one hand we have almost unlimited freedom to choose. On the other, when things go wrong, it is rarely our fault. Something or someone else is to blame: poverty, discrimination, a difficult childhood, the educational system, psychological abuse, the media, the government, junk food, or any other of the proliferating varieties of exculpation. An employee, fired for consistently showing up late to work, sues his employers on the grounds that he is the victim of 'chronic lateness syndrome'. The Economist noted about the United States, 'If you lose your job you can sue for the mental distress of being fired . . . if you drive drunk and crash you can sue somebody for failing to warn you to stop drinking. There is always somebody else to blame.'

"There is much to be said for such a culture. It arises from the highest motives: sympathy, compassion, the desire to help, the urge to understand, the reluctance to be judgemental, a passion for justice; and these are all virtues. It is grounded in a range of scientific disciplines that has given us a deeper understanding of the causal processes behind human action. But taken to an extreme, it turns us into objects, not subjects. We become done-to, not doers; passive, not active. Locating the cause of our condition outside ourselves, we become chronically dependent on others, lacking the ability to break free from circumstance and become masters, not slaves, of our fate.

"This is not, God forbid, to argue against compassion, which stands at the centre of the biblical vision of a good society. What it suggests, however, is that compassion itself must be guided by a duty to help the victim recover his or her capacity for independent action. I once spent a day at Sherborne House, a centre for young offenders in London. The people I met — average age, 18 — had been committing crime for the previous eight or ten years. Yet by no stretch of the imagination could they be called evil. They had come from broken, often abusive, families. They had suffered violence, often from step-fathers. They were victims of circumstance. It would be easy to say that they should have exercised self-control, yet, knowing their family histories, it was hard to see how they could have learned it. They had a strong sense of morality: when I asked them what kind of father would they like to be when they had children, their answers were moving and passionate. They wanted to give their children everything their parents had not given them, especially time and care. When I asked the director of the centre what local communal networks of support they would have when they left, she looked blank. There were none. There is a famous African proverb: 'It takes a village to raise a child.' The young men of Sherborne House never had a village. They had not even had the consistent attention of their own parents.

"What is striking about Judaism is not just its emphasis on responsibility but its insistence on elaborate support structures. Its welfare provisions sustained people going through hard times. The release of slaves after seven years, the remission of debts every seventh year, and the return of ancestral property in the Jubilee year, gave individuals the chance to begin again. The idea that the highest form of charity is to find someone a job speaks volumes about its understanding of human dignity — people do not want to be dependent. Jewish mysticism goes so far as to call the manna the Israelites ate in the wilderness 'the bread of shame', even though it came from God, because they did not have to work for it.

"The ethic of responsibility structures Judaism's entire approach to the world. An obvious example is that biblical ethics is constructed in terms of responsibilities, not rights. Does this make a difference? Are rights not simply responsibilities seen from another point of view? 'Thou shalt not murder' creates a right to life. 'Thou shalt not steal' creates a right to property. The obligation to administer justice creates the right to a fair trial, and so on. That is true, but it omits one feature insufficiently alluded to in discussions of law.

"Rights are passive, responsibilities active. Rights are demands we make on others, responsibilities are demands others make on us. A responsibility-based culture exists in the active mode. It emphasizes giving over receiving, doing not complaining. What is wrong with what Mary Ann Glendon calls 'rights-talk' is that it draws on resources that only exist if we recognize responsibilities. It puts the cart before the horse. It neglects the moral commitments we need to create if rights are to be honoured at all. Rights are the result of responsibilities; they are secondary, not primary. A society that does not train its citizens to be responsible will be one in which, too often, rights-talk will be mere rhetoric, honoured in the breach not the observance.

"One feature of the Jewish law of tzedakah has long fascinated me. Only one thing is as eloquent as the texts that speak of the duty to give namely those that speak of the importance of not receiving. Here is Maimonides on the subject:

" 'A person should always exert himself and endure hardship rather than throw himself, as a dependant, on the community. The sages taught: "Make your Sabbath a weekday, sooner than become dependent." Even one who is learned and honoured should, if impoverished, work at various trades, yes, despicable trades, in order to avoid dependency. Better to strip the hides of beasts that have sickened and died than to tell people, "I am a great sage, my class is that of a priest, support me." Thus spoke the sages.

" 'Outstanding scholars worked as hewers of wood, carriers of beams, drawers of garden water, iron workers, blacksmiths, rather than ask anything of the community and rather than accept any proffered gratuity . . . One who is impoverished, but who endures privation and exerts himself, living a life of hardship rather than burden the community, will, before he dies of old age, possess the means out of which he will give help to others. Concerning such a person, it is written, "Blessed is the man that trusts in the Lord." '

"In these lines, we hear the authentic voice of a religious tradition that has placed freedom of the will at the centre of its concerns. To give and not receive, to act rather than be acted on, to be free and not dependent on other human beings, to be dependent on God alone: these are what give Judaism its distinctive tone of voice. That is what makes tzedakah something other than charity. It is not merely helping those in need. It is enabling the afflicted, where possible, to recover their capacity for independent action. Responsibility lies at the heart of human dignity." 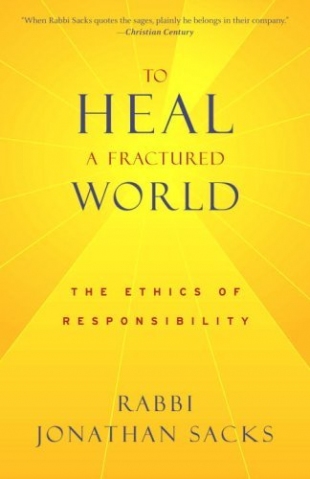